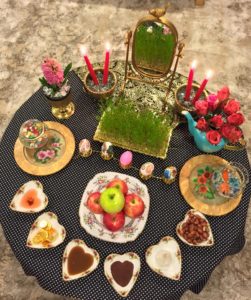 The Persian celebration of نوروز  (Noruz, which translates as “new light” or “new day”) goes back thousands of years.   The modern traditions of Noruz span 2 weeks and revolve around family and nature.   Noruz is a favorite Lexplorers holiday because of the tradition of the هفت‌سین (haft seen, meaning “seven seen‘s,”  where seen س is a Persian letter usually pronounced as /s/).   The Haft Seen table is a special symbolic arrangement that can include flowers, plants, lights, mirrors, eggs, a goldfish in a bowl, plus seven items all starting with the letter seen.  Typical examples are:

Noruz always falls on the first day of Spring because the Persian calendar is a solar calendar, which defines the dates of the year according to the position of the Earth in its revolution around the Sun (and thus the seasons).  The Earth takes slightly more than 365 days for a full trip around the sun, so solar calendars have 365 days in a year (with regular adjustments, such as leap days, called intercalation, to keep the calendar aligned with the seasons).  Solar calendars typically divide the year into 12 months, with each month between 28 and 31 days long.

The Persian calendar is officially known as the Solar Hijra Calendar, and the current year indicates the number of years since the Hijra (or Hegira) of Muhammad from Mecca to Medina in 622 AD.   The Gregorian Calendar, the most widely-used calendar in the world, is also a solar calendar, with the current year indicating the number of years since the birth of Jesus according to the Anno Domini (AD) system.  The year in the Persian calendar is thus always a constant number less than the year in the Gregorian calendar (622 less until the Vernal Equinox, 621 after).  The current Gregorian year is 2017, and the Vernal Equinox thus marked the start of Persian year 1396.

There is also a Lunar Hijra Calendar, commonly known as the Islamic calendar, which counts from the Hegira in 622.  It is a lunar calendar, which defines dates based on the phases of the Moon as it revolves around the Earth.  A full lunar month has about 29 days and 12 hours, and a 12-cycle lunar year has 354 days.  Because a lunar calendar has 11 fewer days than a solar calendar, lunar calendars are not aligned with the seasons.  Holidays in the Lunar Hijra calendar (most notably the Islamic New Year and the month of Ramadan) shift in relation to the Solar Hijra (and Gregorian) year 11 days each year.  The 11 days per year have added up to 42 extra lunar years over the 1396 solar years of the Solar Hijra calendar, and the current year in the Lunar Hijra calendar is 1438. 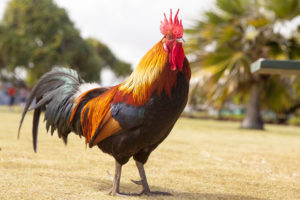 A third common type of calendar is the lunisolar calendar, which defines dates based on both the moon phases and the position of the Earth in the solar year.  For example, the Hebrew Calendar defines a lunar year of 354 days but regularly inserts an intercalary month in order to realign with the solar calendar.  The Hebrew Calendar marks Year 0 as the start of the world according to the Bible, so the current year in this calendar is 5777.  The  traditional Chinese calendar is another example of a lunisolar calendar (combined with an extremely complex astrological system), with the current year being the Year of the Fire Rooster.

There have been hundreds of different calendars throughout history, and all are inextricably tied to the language, history, religion, and cultural rituals of the calendar creators.   In most languages, the key calendar words derive from the familiar objects that move across the sky throughout the year: the sun, the moon, the planets.  For example, the English lunar and month both derive from words meaning moon.  Month comes from Old English mōna “moon” plus -th “quality of”.   Lunar comes from the Latin lūna meaning “moon”; because the phases of the moon were often thought to cause extremes in human behavior, it shares its origin with several words meaning “insane or crazy,” including lunatic and loony.  Solar comes from the Latin sōl meaning “sun”; solstice, the day the sun appears to stop and change directions in its annual path, also comes from sōl plus sto (“stand”).

The Wikipedia list of calendars is exhaustive and has a huge amount of detail about the history and composition of all known calendars.   One thing that is clear from reading about historical calendars is just how much variety there has been throughout history, in the astronomical or astrological basis for the calendar, the number and names of months, and the number of days per month.   It is also clear how arbitrary many of the decisions were. 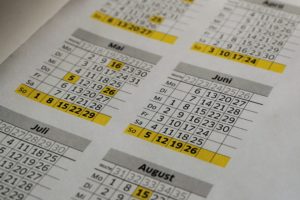 One interesting example comes from the evolution of the Gregorian calendar.  The early Roman calendar in the centuries BC started the year in March and consisted of 10 months, starting with the new year in the Spring and ending with an unassigned period of winter days.   The ten Roman months included months that were named logically in Latin according to their position in the year: Month 5 was Quintilis (Latin for “fifth”), month 6 was Sextilis (“sixth”), month 7 was September (“seventh month”), then came October (“eighth month”), November (“ninth month”). and December (“tenth month”).   Over the course of centuries, Roman emperors changed the calendar by adding the months January and February where the unassigned winter days previously had been, changing the lengths of many months from 29 to 30 or 31, and moving the New Year from March to January 1.   The resulting 12-month calendar became the Julian calendar and later the Gregorian Calendar, which is used throughout the world today.   But when the two months were added, the old month names were not changed, which is why the Gregorian calendar has Month 9 as September (“seventh month”), Month 10 as October, Month 11 as November, and Month 12 as December.  Quintilis and Sextilis also at some point were renamed after Julius and Augustus Caesar, which gave us July and August.  Other emperors, from Caligula through Charlemagne, renamed months according to their personal preferences (e.g., September to Germanicus and January to Wintarmanoth), but none of the renamings became permanent.

Another interesting example of arbitrariness is from the history of the Persian calendar.  In 1976, the Shah of Iran changed the origin of the calendar from the Hegira to the beginning of Cyrus the Great‘s reign;  the year changed overnight from 1355 to 2535.  But this change only lasted 3 years until the 1979 Islamic Revolution in Iran, when the year reverted to the Hegira system.

One final Lexplorers note: the title of this article demonstrates one of our favorite features of the Persian writing system (inherited from the Arabic system): the text (نوروز سال مبارک) is written right to left, but numbers (۱۳۹۶) are written left to right:

A word-for-word translation of the title would be “New Day Year 1396 Happy.”  If English were written the same way, the English title would be

with the words right to left but the numbers left to right.