A Norange and Night Flapper: Origins of Our Favorite Words from Hallowmas Eve 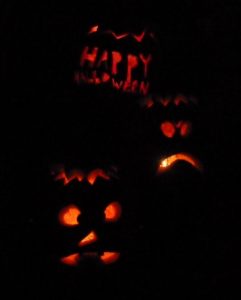 Last week was Halloween, and as the Lexplorers were sitting out on the stoop handing out candy to trick-or-treaters, we got to thinking about Halloween words.  Halloween as a holiday, and many of its traditions, come from the Celts.   But we discovered that some of our favorite Halloween words come from linguistic backgrounds ranging from Persian, Arabic, and Sanskrit to Dutch, Celtic, and Old Norse. 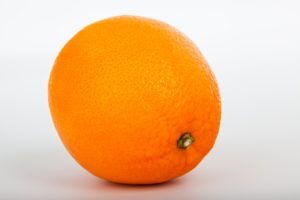 The traditional colors of Halloween are black and orange.  The English word black has a boring etymology: it simply comes from the Old English blæc (“burnt”).  Orange, on the other hand, has a fascinating history.  It is an example of one of our favorite linguistic phenomena: juncture loss.  This is a specific case of rebracketing where the article and noun are fused, such as the English an other becoming another, or the Arabic al-jabr becoming the Latin and English algebra.  The origin of orange is the Sanskrit naranga, and, being a tasty fruit and bright color, the Sanskrit word found its way into many languages of the world with the initial n intact (such as the Arabic and Persian نارنج / naranj).  However, at some point after it reached Europe, juncture loss worked its magic.  In Old French, the double nasal in une narange became a single nasal in the Modern French une orange, and the French passed an orange, not a norange, to English.  Other juncture loss examples from English are a nuncle to an uncle, a napron to an apron, an eke name (“an additional name”) to a nickname.  But juncture loss is a fickle master: German ended up with Orange, Italian arancia, Finnish oranssi, but Spanish still has naranja, Croatian naranča, and Hungarian narancs.  It is interesting to note that in some European languages there are two other common word forms for the orange fruit.   Since the orange fruit arrived in Europe via China (“Sina”), Dutch also has the words appelsien and sinaasappel (“China Apple”), and German has the similar Apfelsine.   And since it was the Portuguese who brought the fruit to Europe from China, the fruit is synonymous with Portugal in some languages: Turkish portakal, Greek πορτοκάλι / portokali, and Bulgarian портокал / portokal.  The well-traveled orange also ended up back in Persian, where پرتقال / portoqal joins نارنج / naranj as a common word for the fruit.

The most common symbol of Halloween is the jack-o’-lantern, a pumpkin carved with a face, lit from within with a candle.  Jack-o’-lantern has a mysterious etymology: it was originally a word for the ignis fatuus (or will o’ the wisp) in 17th century English folklore.  The carved pumpkin sense of jack-o’-lantern appeared in American English in the 19th century.  The English word pumpkin has a clearer source: it comes from the Ancient Greek πέπων / pépōn (“large melon”), combined with the obsolete diminutive -kin.   So pumpkin can be thought of as a “little large melon.”  Other English -kin words that have survived into modern times include bodkin (“little dagger”), napkin (“little cloth”), ladykin (“little lady”), and manikin (“little man,” now more commonly used for a dummy and spelled mannequin). 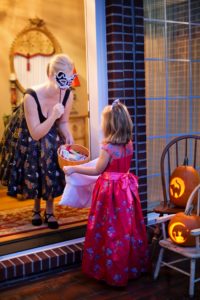 In the American Halloween tradition, children dress in costumes and walk door-to-door trick-or-treating for candy.   Merriam-Webster has a nice succinct definition for trick-or-treat as “a children’s Halloween practice of asking for treats from door to door under threat of playing tricks on those who refuse.”   In modern America, the treats handed out typically take the form of small candy bars.  Candy arrives in English from the Arabic قند‏ / qand (“cane sugar”), possibly originally from the Sanskrit खण्ड / khaṇḍa (“candied sugar”).

Halloween is a night where it is fun to haunt, spook, scare, and frighten, and all four have Germanic origins.   In the Halloween sense, haunt means “to visit as a ghost,” but another common sense of the word as “a place habitually frequented” reflects the origin of haunt from the Old English ham (“home”).   The English spook (“to frighten” or “ghost”) is a direct borrowing of the Dutch spook (“ghost”).  The English scare comes from the Old Norse skirra (“to frighten”).  The English frighten (“to make scared”) comes from the Old English fyrhto (“fear, dread”), with the verbifying -en suffix, similar to whiten and strengthen. 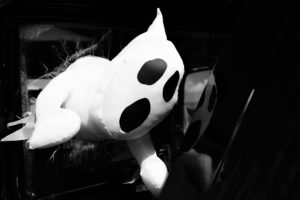 Halloween is also a night for creatures and monsters of all sorts: ghouls, mummies, ghosts, gargoyles, goblins, vampires, and bats.   The English words creature and monster both come directly from Latin words with very similar meanings: creātūra (also related to create and creation) and mōnstrum.   Ghoul and mummy both have Persian and Arabic origins:  ghoul from غول‏ / ghul (“a man-eating demon”), and mummy from موم‏ / mum (“wax”).   Ghost simply comes from Old English gāst (“breath, soul”), but the interesting part of its history is the later introduction of the ‘h’ by Flemish typesetters.  The English gargoyle comes, logically enough, straight from Old French gargouille.  Goblin probably eventually comes to English from the Ancient Greek κόβαλος / kobalos (“rogue”).  Dungeons and Dragons fans will recognize the similarity of goblin‘s origin to the ubiquitous kobold and the metal cobalt, thus named because in legends it was placed in silver ore by goblins.  Vampire comes to English from French and German, who took it from a Slavic word, likely the Serbo-Croatian vampir.    Vampires are often associated with bats, and the etymology of bat is very interesting.  The English word for the flying bat comes most directly from the Middle English bakke, which is itself a shortened form of similar bat words from Scandinavian languages.  These original Scandinavian words include the Old Danish nathbakkæ (“night flapper”) and Old Norse leðrblaka (“leather flapper”).   The etymology of bat the creature is unrelated to the other sense of bat, the club or paddle, which, bringing the Halloween discussion full circle, is likely from Celtic.