The votes have been counted, and the Lexplorers are pleased to announce the winners of the 2017 Lexies.   In determining the Lexies winners, we focused particularly on 2017 arrivals that had interesting elements of language learning and/or linguistics.   This year we present Lexies for Best Book, Best Movie, and Word of the Year.

Word by Word was the obvious pick for the 2017 Best Book Lexie.   It was one of our favorite books of the year in any category, so the Lexies judges’ deliberations did not take long.   In our Lexplorers review of Word by Word, we had this to say about the book:

In Word by Word, Stamper provides an inside view of the world of lexicography, taking the reader on a tour through all the hard work that goes into producing “The Dictionary.”  While this has the potential to be a very dry topic, the author gives us an account that is interesting and often hilarious.  Stamper writes with a self-deprecating style about the craft of dictionary-making and the complicated process that goes into creating and updating each entry in a dictionary: reading and seeking out relevant citations, determining the senses and subsenses for each word, writing and editing the definitions and sample sentences, researching the etymology and pronunciation.  Along the way she also introduces many of the people behind the scenes (the “drudges”) who toil for years because they love what they do (“it is the damnedest thing to spend your career in the company of this gorgeous, lascivious language”). … Word by Word is fascinating, very funny, and, as might be expected from a book written by a lexicographer, chock full of unexpected words and turns of phrase, like “labyrinthine complexity of a word’s differentiae”.

Honorable Mention: The Rise and Fall of D.O.D.O. by Neal Stephenson and Nicole Galland

We have loved (almost) everything from Neal Stephenson, starting with Zodiac, and The Rise and Fall of D.O.D.O. is a fun fantasy/sci-fi story written with Nicole Galland.  But what made the book a contender for the 2017 Best Book Lexie was the fact that the protagonist is not just a time traveler, but also a linguist!

Korean has been a particular focus for the Lexplorers in 2017 thanks to the Couch to Korean Challenge,  which is how we came across Pachinko.  Pachinko is a sweeping historical (fictional) saga of several generations of a Korean family living in Japan.  Pachinko is a well-written, fascinating novel about the complexities of national and linguistic identity.

Arrival pretty much broke the Linguist Internet this year, so it was a no-brainer pick for the 2017 Best Movie Lexie.  It is a science fiction movie where the main character is a linguist, which makes it a nice companion piece to The Rise and Fall of D.O.D.O.  Aliens arrive on Earth, and the linguist is tasked with figuring out how to communicate with the new creatures.   There are a lot of nonsense Hollywood elements, such as the fact that the word “linguist” is never said in the movie (she is an “expert translator”),  or Jeremy Renner as a physicist who does very little other than follow the linguist around.  But for the sake of having a Linguist Action Hero, we are happy to overlook the Hollywood silliness.  We just hope that 2018 brings a joint sequel with Wonder Woman (might we suggest “Super Linguist and Wonder Woman Save the World“?).

This might seem like an odd nominee for a Lexie Best Movie award, but Despicable Me 3, like all the other movies in the Despicable Me franchise, has the Minions.  And as far as we are concerned, the Minions are just little yellow Lexplorers.  They are bilingual, understanding the (often accented) English of the other characters, but also happily speaking in Minionese, a hilarious mix of many human languages.  In Despicable Me 3 there is a fun scene where Gru (the main human character) pulls out a Minionese dictionary and tries to speak to them in their language, only to be met with laughter.  We can identify with this experience all too well.

Lexplorers Word of the Year 2017: Trumpery 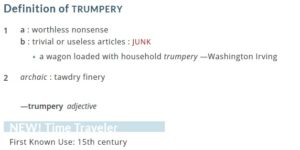 We first came across the word Trumpery when reading Ammon Shea’s book Reading the OED.   The word dates back to the 1400s in English, when it meant “deceit or fraud” and “worthless nonsense.”   We can think of no better word to represent 2017.

Trumpery derives from the Middle English trompery and ultimately from the Middle French tromper, meaning “to deceive.” (You can see the meaning of this root reflected in the French phrase trompe-l’oeil-literally, “deceives the eye”-which in English refers to a style of painting with photographically realistic detail.) Trumpery first appeared in English in the mid-15th century with the meanings “deceit or fraud” (a sense that is now obsolete) and “worthless nonsense.” Less than 100 years later, it was being applied to material objects of little or no value. The verb phrase trump up means “to concoct with the intent to deceive,” but there is most likely no etymological connection between this phrase and trumpery. – Merriam-Webster Dictionary