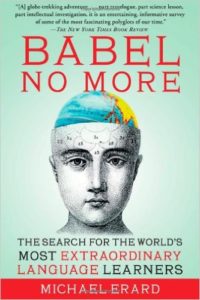 Babel No More: The Search for the World’s Most Extraordinary Language Learners

There is a certain appeal to stories about extreme human performance, especially in areas where the reader has personal experience.  Anyone who has tried to run a 5k race can appreciate the accomplishment of someone running 100 miles.  Language learning is something that most people have attempted, and most can thus appreciate the accomplishment of a single person learning a dozen languages.  In Babel No More, Michael Erard sets out on a “search for the world’s most extraordinary language learners.”  This quest has a lot in common with Born to Run, in which Christopher McDougall set out to find a legendary “hidden tribe” of distance runners who can allegedly run for days without stopping for food or water.  McDougall found that, while there was some truth to the myth of the hidden tribe, the reality of the actual people behind the legend was much more interesting.  In the course of his search in Babel No More, Erard similarly teases apart language learning myth from reality and presents a compelling story about the hidden tribe of extreme language learners, exploring their motivations, their achievements, and their limitations.

The popular press, as well as the Internet as a whole, is rife with uncritical accounts of extreme language learning abilities. One common type of story is a fawning report of someone who “speaks” a large number of languages, usually something like “It was well known that he could speak 100 languages!” or “This four-year-old girl speaks 7 languages!”  This is always written with no discussion of what level of competency is required to “speak” a language.   The Wikipedia List of Polyglots gathers many of these mythical language hoarding stories in a single place and provides a fine demonstration of how easy it is to inflate the number of languages that someone “spoke,” “was fluent in,” “mastered,” or “knew.”  For example, one entry reports someone who  “knew the following thirty-nine languages,” but then lists only 36 languages, including both “Biblical Hebrew” and “Rabbinical Hebrew” and both “Ancient Armenian” and “Modern Armenian.”  Another is reported to have “mastered about seventy-five languages” and proceeds to list “Irish,” “Scottish Gaelic,” and “Gaelic,” plus both “Czech” and “Slovak,” “Serbian” and “Croatian,” and “different dialects of Chinese.”  That is not to say that learning large numbers of languages is impossible, just that the claims should be viewed with a healthy dose of skepticism.

The other common type of uncritical language learning story is about a person who “learned” one or more languages without effort, usually by incidental exposure to media in that language.  For example, if you use Google’s auto-complete feature for the phrase “learned English by”, you get hundreds of links to articles about people claiming to learn English from sources like

I expected the same nonsense from Babel No More, given that the book jacket summary has inauspicious quotes like “Emil Krebs … spoke sixty-eight languages” and “Lomb Kato…taught herself Russian by reading Russian romance novels.”  I was pleasantly surprised, however, to find that Babel No More was a critical, entertaining, and well-written journey through the world of hyperpolyglots, people who learn a large number of languages.

The author states that his objective when he started researching the book was to answer the question “What is the upper limit of the ability to learn and speak languages?”   In seeking the answer to this question he provides fascinating profiles of hyperpolyglots living and dead.   He starts with historical hyperpolyglots, from Giuseppe Mezzofanti in the 1800s to Ken Hale most recently.  In doing so, he goes beyond the myths and takes a very critical eye toward the claims of their language learning capabilities and methods.

Erard also profiles several living hyperpolyglots that he was unable to meet personally.  He provides a fascinating description of Christopher, a man with a very low IQ (below 80) and a mental age of 9 who has an amazing lexical memory and can translate texts in more than a dozen languages.   Erard discusses Ziad Fazah, one of the most egregious examples of the self-proclaimed self-promoting language learning experts.   Fazah has advertised that he “read, writes, and speaks fifty-four languages fluently,” and he once claimed that given seven years he could “learn the rest of the world’s estimated three thousand dialacts.”    Yet Fazah is currently most famous for his appearance on the Chilean television show Viva el Lunes, in which he was unable to understand basic sentences in many of the languages he claimed to be fluent in.   (The video of his spectacular failure is available for all to see, and there is a nice detailed summary with the title “Ziad Fazah – a man who does not speak 59 languages”.)

Erard tracks down many of the legendary living hyperpolyglots.  He meets with the winners of two separate Belgian competitions that set out to find the most multilingual person in Europe in 1987 and 1990.  He visits with Alexander Arguelles, who spends 9-14 hours on most days studying a long list of languages, just for fun.   Erard meets with Helen Abadzi, who studied about 20 languages in order to better communicate while traveling for her job at the World Bank.

The profiles of the living hyperpolyglots are truly interesting because they allow the language learners themselves to discuss their motivations and their study methods.  While the hyperpolyglots are understandably proud of the long list of languages they have studied, they are also all quite honest about the range of capabilities they have in their set of languages.  To emphasize the value of recognizing different levels of language competency, Erard draws the distinction between “All or Nothing” and “Something or Something.”   The simplistic “All or Nothing” view of language learning allows only a binary distinction: either a person “knows” a language or does not.  The “Something or Something” view recognizes that there can be a wide range of valid language learning goals, and that there is value in every level from elementary reading through full fluency.   The “All or Nothing” model leads to the ridiculous claims that someone “speaks 100 languages.”    Each of the living hyperpolyglots featured in Babel No More took a “Something or Something” approach and was willing and able to specify the small set of languages they keep active and could reasonably claim fluency in.  They also can separate their other languages into categories, such as “can have basic conversation” or “can read but not speak or understand” or “could be conversant after a few days spent reactivating or refreshing”  or “have a nodding acquaintance with” or “know superficially.”

In the end, from Erard’s travel through the world of hyperpolyglots there emerge three main factors that are instrumental in helping hyperpolyglots learn many languages:

I came away from Babel No More with a long list of names, books, topics, and sites that I am looking forward to exploring and learning about.  That in itself is reason enough to rate the book highly.  The short list of interesting places I plan to explore in the future: