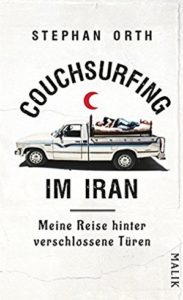 Next up in our series of Lexplorers reviews of “What Were They Thinking? travel adventures,” today we discuss Couchsurfing Im Iran: Meine Reise hinter verschlossene Türen (“Couchsurfing in Iran: My Travels Behind Closed Doors”) by Stephan Orth.  This book is a perfect follow-on to Wendy Simmons’s solo journey to North Korea, since both describe solo travel adventures in countries that few of us will ever be able to explore personally.  (As the title indicates, Couchsurfing im Iran is written in German, but it will be appearing in English in May 2018 with the title Couchsurfing in Iran: Revealing a Hidden World.)

In Couchsurfing im Iran, Stephan Orth, a journalist at Spiegel Online,  shares his experience traveling around Iran in 2014.  Unlike Wendy Simmons, whose entire visit to North Korea was monitored and micromanaged by official government handlers, Orth was able to freely travel around Iran and stay with regular people offering accommodations online via couchsurfing.com (official slogan: “Stay with Locals and Meet Travelers”).   The recurring theme of the book is that the day-to-day life of ordinary Iranians is nothing like the negative image of the country that is common in the West.   Almost without exception, the Iranian people that Stephan Orth meets are friendly, hospitable, and eager to welcome him into their lives.

The rewarding personal experiences described in Couchsurfing im Iran did not come without risk.  The premise of the trip itself was a risky undertaking for both Orth and his hosts, since “das Couchsurfing” is illegal (Verboten!) in Iran; the Iranian government apparently fears that allowing informal accommodations such as couchsurfing would enable spies to move about undetected within the country.  Also risky was the fact that Orth was a journalist, an occupation that is aggressively persecuted by the Iranian government;  he lied on his Iranian visa application by not revealing his true occupation, which enabled him to enter the country but would have put him at higher risk if caught.   Taking on further risk, Orth kept detailed notebooks during his travels and took lots of photos of things he wasn’t supposed to (military facilities, unveiled women, alcoholic beverages).  At one point, he even got arrested, and his luggage was searched by police and soldiers with machine guns.   Somehow they didn’t find his notebooks or the pictures of forbidden things or any evidence of his being a journalist, and he was eventually released.  At which point his guide tells him that two “spies” were arrested two years before at the same place, and they are still in prison in Tehran.

Couchsurfing im Iran is fun to read partly because of the illegal and/or dangerous things that Orth gets away with during his Iran travels;  it would clearly be a very different book if he had ended up in Evin Prison like the many other foreign journalists (and other innocent visitors) arrested regularly in Iran.  For example, Orth’s arrest happened not far from where the three American hikers had been arrested in 2009; they ended up in Evin for years.  And Orth’s visit was just months before Iranian-American journalist Jason Rezaian of the Washington Post was arrested and imprisoned for 18 months.  Given the many risks he took, Orth got very lucky to have completed his travels without a stop in Evin; in addition to luck, he likely benefited from traveling as a German, vs. as an American or especially an Iranian-American.    Fortunately we all get to benefit from Orth’s luck too, because he wrote this very entertaining book about his couchsurfing experiences in Iran.

And what fun experiences he had, joining regular Iranians in a wide range of illicit actvities.   Even though couchsurfing is officially prohibited in Iran, Orth reported finding over 13,000 Iranian members on the couchsurfing.com site.  Some of the hosts he stayed with did take some precautions, such as sneaking him into the house so the neighbors wouldn’t see him, or cautioning him not to speak English around the neighbors.   A single woman hosting a man in her home is extra risky, so some female hosts referred him to male friends who could host him instead.   But then again one of his couchsurfing hosts was a dominatrix famous in the Tehran S&M scene for taking and posting pictures of “forbidden games with her slaves.”   Another host had a side business producing hundreds of gallons of (illegal) red wine.   Orth even stayed with one host who held a pool party with bikini-clad, veil-free, Iranian women.   One of his hosts had previously lost her license as a tourist guide because of hosting couchsurfers in her home, but she still continued to host them, as well as to (illegally) act as a tourist guide.   One host (appropriately nicknamed Funman) invited Orth to take his son’s place at a wedding they were invited to; at the wedding Orth gets a friendly Hitler salute from another (male) guest who tells him that he has always wanted to kiss a German man.  These are not the kinds of stories we are used to hearing about people in Iran, and Stephan Orth does a fantastic job in Couchsurfing im Iran opening the door and letting us meet the people inside.

Stephan Orth had such a positive experience researching and writing Couchsurfing im Iran that he followed it up with a similar trip to Russia.   The resulting book, Couchsurfing in Russland, was recently published.  We look forward to reading this sequel, and we hope that Orth is already working on the logical conclusion of the Couchsurfing Trilogy: Couchsurfing in North Korea.