Book Review: Word By Word: The Secret Life of Dictionaries 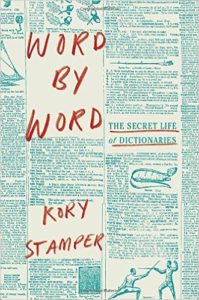 Word by Word: The Secret Life of Dictionaries

I will happily and proudly admit that I love dictionaries.  I have several bookshelves full of dictionaries of all types.   And as an unabashed lexiconnoisseur, I was quite excited to finally get a chance to read Word by Word: The Secret Life of Dictionaries by Kory Stamper.   It definitely did not disappoint.  In Word by Word, Stamper provides an inside view of the world of lexicography, taking the reader on a tour through all the hard work that goes into producing “The Dictionary.”  While this has the potential to be a very dry topic, the author gives us an account that is interesting and often hilarious.  Stamper writes with a self-deprecating style about the craft of dictionary-making and the complicated process that goes into creating and updating each entry in a dictionary: reading and seeking out relevant citations, determining the senses and subsenses for each word, writing and editing the definitions and sample sentences, researching the etymology and pronunciation.  Along the way she also introduces many of the people behind the scenes (the “drudges”) who toil for years because they love what they do (“it is the damnedest thing to spend your career in the company of this gorgeous, lascivious language”).

Word by Word is packed with fun examples from Stamper’s experience at Merriam-Webster working on dictionaries, laying bare the difficult decisions faced by lexicographers.   She devotes chapters to word usage and “bad” grammar (irregardless, its/it’s, dialectal variants, descriptivism vs. prescriptivism), using lexical corpora for clarifying word senses, inclusion of obscenities and vulgarities, etymology, and pronunciation.  Stamper mixes in some interesting dictionary history, including the current challenges faced by dictionary publishers in a digital world.   She also gives a lexicographer’s-eye view of some recent lexicontroversies: the addition of a new sense to the word marriage to include gay marriage, and the definition of nude as “having the color of a white person’s skin.”

Word by Word is fascinating, very funny, and, as might be expected from a book written by a lexicographer, chock full of unexpected words and turns of phrase, like “labyrinthine complexity of a word’s differentiae”.  I learned some new words, including foofaraw (“a great deal of fuss or attention given to a minor matter, originates in the American West where it has been variously spelled as fofaraw, forfarraw, and froufraw“).  And I learned some interesting word origins, such as pumpernickel, which comes from the German words pumpern (an onomatopoeaic synonym of blähen, “to flatulate”) and nickel (“imp, kobold”), so named because of the flatulence the bread can cause.   One half-German neologism that jumped out at me was peeververein (peever being an English word for “complainer” and verein being the German word for “club, fellowship”), which is a fine example of real-time lexicography in action: the word is not yet in The Dictionary but is a recent coinage by John McIntyre of the Baltimore Sun intended to mean “The collective group of self-appointed language experts whose complaints about errors in grammar and usage are generally unfounded or trivial.”   Another word pulled directly from German, sprachgefühl (“the intuitive grasp for the feel of a language”), is a quality essential for success in lexicography (sprachgefühl plus patience, an amazing eye for detail, and a tolerance for low pay).

I felt that Word by Word is at its best when Stamper humanizes the lexicographers and makes clear that The Dictionary is created over the course of many years by a team of people who simply love their job.  As I read about the author’s path to lexicography, I identified with many of her experiences growing up nerdy (using Roget’s Thesaurus to find appropriate words for bullies and jerks, reading dictionaries for fun, and getting excited about having the chance to read medieval Icelandic family sagas).   I couldn’t help thinking “There but for the grace of God go I!”  As a demonstration of my appreciation for Stamper’s confessions about growing up as “a capital-n Nerd” and being “treated accordingly,”  I offer some of my own true lexiconfessions: 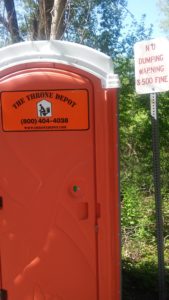 My favorite anecdote from Word by Word is in the chapter about the word nude, where Stamper is shopping for clothes with her teenage daughter.  She spots a phrase on a makeup box that is relevant to the lexical entry she is working on, and she excitedly snaps a picture for the citation file.   Her daughter is not quite as excited about the discovery of the lexical evidence and moans “Oh my God, can you ever just, like, live like a normal person?”   Now, I take pictures all the time when I stumble upon words and phrases that strike me as particularly interesting.  Fortunately my kids aren’t teenagers yet, so they still share some of my enthusiasm when I explain why I think something is interesting.  Especially when it involves toilet humor.   For example, I recently passed a port-a-john from The Throne Depot with a cartoon drawing of a person sitting on a toilet.  Right next to the port-a-john was a sign “No Dumping Warning $500 Fine.”  Talk about sending mixed messages!

The only thing that keeps me from bestowing Word by Word with a perfect 10/10 Lexplorers rating is that I felt there was one chapter missing: when and how are words removed from a dictionary?   Stamper writes very eloquently about the criteria lexicographers use when deciding whether to add a word to the dictionary.  She writes about the battles between the inclusionists, who think that every word ever used should be in The Dictionary, and the people who feel that some “inferior” words should not be included because that would “legitimize…piss-poor, wrong usage.”  Stamper cites the three criteria that lexicographers generally use for inclusion of a new word:  1) widespread use in print, 2) sustained long-term usage beyond an initial burst of usage, and 3) “meaningful use” (antidisestablishmentarianism being an example of a word with no meaning).   But what is not addressed is whether a word added to The Dictionary is there forever, regardless of whether it continues to have widespread, sustained, meaningful usage?    Maybe it is my lingering skepticism and annoyance at the words used in the National Spelling Bee, but I would like to know whether lexicographers have criteria for removing words like guetapens and guerdon that may have been fine words for Chaucer in the 1300s but aren’t at all widespread or sustained in the 2000s (outside of spelling bees).

But the missing chapter is mostly a minor quibble.  I have absolutely no reservations in strongly recommending Word by Word.  Your guerdon will be a fun and informative journey through lexicography.