Bracing For Humiliation and Embracing Humility

Many years ago, shortly after I moved to Germany, I walked by a playground and stopped to listen to the 4-year-old kids talking to each other in natural and fluent German.  I was still in the phase of painfully trying to construct the most basic German sentences, and I remember thinking, “Every one of these German kids is smarter than I am!”   Intuitively I knew that I was trying to do something (learn a new language) that for an adult is extremely challenging but that kids can do without effort.  But knowing that didn’t make it any less frustrating to communicate.   Not only that, whenever I tried to speak German with an adult native, they would immediately switch the conversation to English.  For them it was easier, because every one of the German adults had started learning English in school when they were 9 years old, and they thus spoke English much better than I could speak German (and sometimes better than I could speak English).

Up until then, I had been invincible and omniscient; like most young people, I felt that I knew everything and that I could easily do anything I wanted (and of course could do it better than those old people who kept telling me what to do and how to do it).   In English, I could pontificate at length on any topic I wanted to, from politics to sports to science.  It didn’t matter whether I knew what I was talking about (I usually didn’t), I could still talk effortlessly.  But in German, I could barely ask where the bathroom was.  Suddenly being incapable of communicating what I thought, what I wanted, or even what I needed, was an eye-opening experience.

There is a reason that learning a new language as an adult can make you feel low, like dirt.  It can be humbling, often humiliating.   Humble, humility, and humiliate share a common etymology:  they all come from the Latin humilis ‎(“lowly, slight”) , which in turn comes from humus ‎(“ground, soil”).  Humility and humble take on the positive connotation of “lowly” or “meek,” in which you can voluntarily choose to not be pretentious or proud.  Humiliation is almost always forced upon you, such as when you try to say a new sentence in a new language and are met by a native speaker staring blankly at you uncomprehendingly.

The fear of this type of humiliation is one of the main reasons that many adults do not even attempt to learn a new language; it is so much easier to just stay in the safety of your native language.   But if you do take on the challenge of learning a new language, you can let fear dominate and constantly brace for bad experiences.  Or you can accept the inevitable embarrassing moments and embrace the experience.  Brace for and embrace both come from the Latin bracchium, meaning “arm”.   Brace for typically has a negative connotation, as you brace for, or arm yourself against,  things like bad news or bad weather or embarrassment.  Embrace usually is a positive thing, as you embrace, or put your arms around, a friend or good news or a new experience.  (Appropriately, the German word for embrace or hug is umarmen.)  You can brace for humiliation or you can embrace humility.

My experience learning German in Germany was certainly a challenge, and the fluent 4-year-old kids on the playground had me initially bracing for the worst.   But I was able to overcome the initial fear by accepting my limitations and setting the expectations accordingly.   First, I accepted that I will never reach the level of fluency that a 4-year-old child already has.   No matter how hard I study and how much I practice, I will always be learning the language and I will never be a native speaker.  I will always have an accent.  I will always search for the right words to say.  I will always make grammatical errors.  Once I accepted these limitations, I was able to focus on just learning as much as I could and practicing to minimize my errors.  In the end, it was an experience that I would not trade for anything.   As painful as it was, by forcing myself to speak German instead of keeping silent for fear of being exposed as a bumbling imposter, I made many good friends who were patient and understanding and helpful as I gradually learned to express my thoughts and carry on real conversations.  Where I initially braced for the humiliation of being a complete idiot amidst fluent 4-year-olds, I ended up embracing humility, accepting my limitations, learning as much as I could, and enjoying the experience. 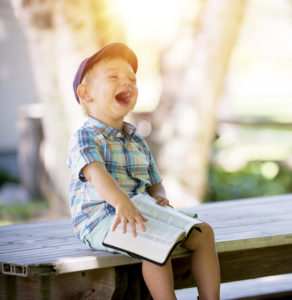 Which all sounds fine in hindsight, but at least German uses the same alphabet as English and I could easily read words from Day 1.   This made it easier to puzzle out, look up, and practice saying new words.   In contrast,  I’m only a few wobbly steps into the Couch to Korean Challenge, and I already feel overwhelmed by the difficulty of reading any new word in Hangul, let alone trying to say it.  For example, this was me today awkwardly trying to read simple phrases (Hello, Nice to meet you, Goodbye) from Page 1 of the Elementary Korean book, while Carlos tried hard not to be the 4-year-old kid laughing at me:

Despite my success in learning German, as I take on the challenge of learning Korean, I find myself bracing for, putting my arms out to protect myself against, a good dose of humiliation.  In Korean I am illiterate, and being illiterate is quite humiliating.   But the literacy rate in Korea is 97.9%, so I have to have confidence that decoding words will get easier with practice.  And hopefully pronouncing those words and constructing meaningful sentences will follow.  I do accept my limitations and can set reasonable expectations, so I plan on embracing, opening my arms in anticipation of, humility and this learning experience.