25 Memorable Things From Our Trip to Korea (Part 1) 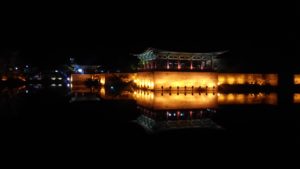 The Lexplorers Team recently spent 2 weeks in Korea, and, wow, what an awesome experience!  We met lots of wonderful , friendly, and welcoming people.  We visited historic palaces, Buddhist temples, royal burial mounds, and eclectic markets.   We tried all kinds of tasty food and drinks.  We sang in a Norebang (Karaoke room).   And, of course, we celebrated Carlos’s wedding.

When we sat down after the trip, we came up with a list of memorable things about Korea.   And the list was really long because it was a very memorable trip!  Many of the items were specific historical sites and other famous places that are in all the guide books (we used Lonely Planet and DK Eyewitness on our trip).   We enjoyed those places, but for our list we wanted to focus on some of the things you might not necessarily find in a guidebook.   We tried to whittle it down to a top 10 list, but the best we could do was 25.  Today we will look at the first baker’s dozen (Part 2 can be found here),  in no particular order: 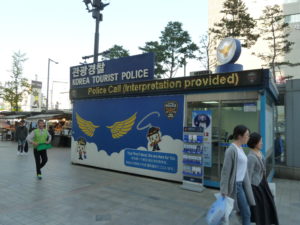 Tourist friendly:  Korea is the most tourist-friendly country we have ever visited.  Everywhere that we went, from the airport to the subway to the markets to the historical sites, as soon as we looked around in that confused touristy way, there were English-speaking helpers who would come up and ask how they could help us.  It started with the Korean Air employees before we even got to Korea: when we asked them to verify that our bags had made it onto the connecting flight (because the American airport employees couldn’t have been ruder or less helpful when we checked in, sending us to the wrong places and trying to overcharge us for everything), the Korean Air employees at the gate went so far as to send someone outside to the baggage cart to find our bags.  One time in the Seoul subway we tapped a fare card at the wrong entrance and stood debating what to do;  within seconds an official helper appeared and tapped his card at the correct entrance so that we could enter without paying double fare.  (In the Boston subway if we made a mistake like that, we would have to seek out a surly employee, who would likely tell us we needed to go downtown to headquarters to fill out a form, then wait 4-6 weeks to get a refund.)  Almost all signs are in both Korean and English, and there is even a “Korea Tourist Police” to help (“Your first friend.  We are here for you.”).

Wonderful people:  Related to item #1, throughout our stay in Korea, the people were friendly and welcoming.  They made us feel like they were genuinely happy that we had chosen to visit their country, and they personally wanted to make sure we enjoyed our stay.  Before we left for the trip, every single Korean and Korean-American we talked to offered friendly advice about things to do and see or offered to put us in touch with family or friends in Korea.  One new friend in Seoul, who we had met online while preparing for the trip, served as our personal tour guide for 2 days and gave us a thorough introduction to traditional Korean food.  At the cafe where we had breakfast every morning in Seoul, the proprietor greeted us like long-lost family and some days even brought us extra orange slices and rice cakes.

Affectionate elderly passengers: This one caught us completely off-guard.   We had expected to stand out during our visit, since at first glance it is obvious that we are not Korean.  For the most part we did not feel singled out, with one major exception.  We were traveling with two Lil Lexplorers, aged 10 and 12.  Many times when we rode the subway, elderly people would stare at the kids and smile.  But some took it even farther.  On one ride, an elderly Korean woman sat down next to the 10-year-old boy, held his hand, stared at his face, and spoke (Korean) to him for the entire ride.  Other times, elderly women touched his cheek or his hair and said “Handsome!” in English.  One elderly man smiled at both kids and gave them pieces of candy.  If any of this had happened on an American subway, we would have immediately whisked the kids away from the creepy old people.  But in Korea it just seemed like another example of people being really friendly.

Seoul is massive yet remarkably clean:  Seoul is a huge city, with over 25 million people in the metropolitan area.  From the city center you can look in any direction and see large complexes of high-rise apartment buildings.  And yet everything in the city is amazingly clean and shiny, from the buildings to the streets to the train stations.  Everywhere we went in the city, there were teams of cleaners hard at work sweeping, raking, painting, and washing.   When we walked along Cheonggyecheon, the man-made stream running through the city, there was a cleaning team in the water washing the rocks.  We didn’t see any graffiti on buildings or in train stations.  It seemed a bit unnatural for a big city to be so clean, but it was really pleasant.

No tipping:  One stressful element of visiting a new country is trying to figure out the societal norms that are different from at home, so as to not do anything egregiously rude.  Tipping is one of these stressful areas.  What percent do you tip at restaurants and taxis?  Do you tip shuttle drivers and hotel employees?  Well in Korea it is simple: there is no tipping.  People do their job competently, usually with a smile, and they just seem happy to do it. 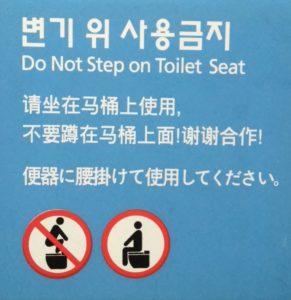 Do Not Step on Toilet Seat!

Free public bathrooms:  Another of those stressful items for travelers is finding a bathroom.  Sometimes you just have to go.  In many places there is no such thing as a public bathrooms, or there are only coin-operated bathrooms that leave you frantically looking through your coins to see if you have the right ones.  We will freely admit that in our time of need we have done more than our share of sneaking into restaurant and hotel lobby bathrooms, but even some of those are coin-operated.  In Korea, there are free public bathrooms everywhere.  They are clean and well-maintained.  And they have helpful multilingual signs.

Free WiFi:  While not quite as urgent as bathrooms, access to WiFi is pretty important while traveling in 2018.   In most hotels where we stayed in Korea, each room had its own WiFi router.   Airports, cafes, markets, tourist sites, train stations, even the trains themselves, all provided free WiFi.

Ubiquitous good coffee:  Tea is historically the hot beverage of choice in Korea, but coffee has clearly taken over in present-day Korea.  There are 5 or 6 coffee shop chains that are everywhere in Korea.  The offerings are primarily espresso-based drinks (americano, cappuccino, etc.) vs. the weak drip coffee that is more common in the US.  There were just two features of Korean coffee culture that took some adjustment for us.  First, Koreans seem to drink their coffee black, so coffee shops do not provide milk or cream.  In one Starbucks, we saw the familiar stainless steel milk/cream carafes, but they were empty and appeared to be just for show.  Second, Korean coffee culture seems to be on an afternoon/evening schedule vs. the early morning coffee schedule we are used to.   An American coffee place that did not open for morning rush hour would not be in business very long,  but there were at least 20 coffee shops within a 10 minute walk of our hotel in Daegu, and only 2 of them opened before 10 am!

Convenient 1000:1 exchange rate: Doing quick mental exchange rate math to determine the cost of an item is an essential traveler skill.   During our visit, the exchange rate was almost exactly 1000 Korean Won to 1 US Dollar, so the mental math was as easy as lopping off 3 zeroes.  A coffee is 2000 Won?  That’s $2.  Train ticket is 40,000 Won:  40 bucks.   Subway ride is 1250 Won: $1.25.  We know that exchange rates are complex things that are difficult to control, but we would like to think the 1000:1 exchange rate is just another example of Koreans going out of their way to make our visit pleasant and memorable! 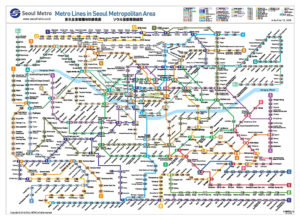 Excellent public transportation:  Speaking of the subway, the Seoul subway system is the best that we have had the pleasure to ride on.  It goes everywhere in the city and well outside the city (just look at that subway map to the right!).  The stations and trains are clean and well-labeled (in Korean and English, with some messages also in Japanese and Chinese).   The trains run frequently and on schedule.   And yes, it only costs $1.25 (base fare for adults, add a couple dimes for longer rides) and $0.45 (kids); our family of 4 could get anywhere in Seoul for $3.40.   Train service between cities (on Korail) is similarly convenient and inexpensive.   When  we took the train from Seoul to Daegu, there were express KTX trains every 10 minutes for an adult fare of $40.  The equivalent US route would be the Acela from Boston to New York, which runs once an hour (if you’re lucky) and costs $150-200.

Cheap taxis: While we primarily used public transportation in Korea, we also took a few taxi rides.  Taxis, like just about everything else in Korea, are clean and convenient.   The base fare was usually $2.80-$4.00, and that base fare covered almost all of our short (5+ minute) rides.

Elusive Postcards:  Whenever we travel, we try to send postcards to friends and family back home.   Everywhere else that we have visited, postcards were really easy to find.  Every major site and tourist area would have little souvenir shops with racks of colorful postcards (usually out in front of the shop where they are easy to see).  In Korea, this is not the case.  We found very few postcards anywhere.  While there were souvenir shops, they did not have racks of postcards.

Dust Masks: On our first day in Seoul, we noticed lots of people walking around the city wearing face masks.  There were simple white masks, but there was also a huge variety of colorful and fashionable masks.  We learned that this is because of Fine Dust (also called “Yellow Dust” and “Asian Dust”), clouds of desert dust that blows from Mongolia across Asia.  The daily Korean weather forecast includes a segment on the Fine Dust forecast, and whenever the dust level is high then many people choose to wear the masks.   Particularly high dust level warnings are even sent out to all cell phones, much like tornado or hurricane warnings in parts of the US.  We were a little alarmed the first time everyone around us got a simultaneous cell phone alarm, but nobody seemed panicked so we figured it was fine.