In the United States, requirements for graduating from high school vary greatly from state to state, and often also from town to town.  The Education Commission of the States (ECS) maintains a detailed list of Standard High School Graduation requirements for all 50 states, originally compiled in 2007 and updated regularly as state requirements have changed.  The ECS survey shows that most states have no foreign language requirement for high school graduation, although there are some notable exceptions.  For example, New York and New Jersey both require 1 year of foreign language study; the District of Columbia  and Michigan require 2 years of a World Language.

The public school system in the state of Massachusetts is often considered one of the best in the United States, based on student performance on several different standardized metrics commonly used in the US.  Massachusetts public school students have also performed competitively on many International evaluations. The Massachusetts Department of Elementary and Secondary Education Leading the Nation page showcases some of the recent results, including #1 in the U.S. in reading and math on the National Assessment of Educational Progress (NAEP) exam and (tied for) #1 in the world in reading on the Program for International Student Assessment (PISA).  A recent article in Atlantic magazine (“What Are Massachusetts Public Schools Doing Right?”) also highlights the performance of the Massachusetts system.  The state achieves this high performance despite having no set of minimum high school graduation requirements other than passing three different Grade 10 standardized exams in English Language Arts, Math, and Science;  Massachusetts state law also requires the instruction of “American history and civics” and “physical education.”   All other curriculum decisions and graduation requirements are determined by each local school district, and this results in a range of offerings and requirements across high schools the state.

That is not to say that the state does not recognize the value of foreign language instruction.  Massachusetts strongly recommends that students study a foreign language, even if the state does not require it.  For example, the Massachusetts Foreign Languages Curriculum Framework (last updated in 1999) states that “All students should become proficient in at least one language in addition to English by the time they graduate from high school.”   More recently, the state released MassCore, which it describes as “a recommended program of studies” but “not a state graduation requirement.”

The Massachusetts High School Program of Studies (MassCore) is intended to help our state’s high school graduates arrive at college or the workplace well prepared and reduce the number of students taking remedial courses in college. MassCore recommends a comprehensive set of subject area courses and units as well as other learning opportunities to complete before graduating from high school.

With no foreign language coordinator at the state level of Massachusetts government, much of the foreign language advocacy and coordination comes from the Massachusetts Foreign Language Association (MaFLA), a “non-profit service organization committed to the professional growth of its members and to the promotion of quality teaching and learning and cultures from kindergarten through the college level and beyond.”   MaFLA was instrumental in the recent passage of the Language Opportunity for our Kids (LOOK) law, which, among other important items that improve language education, established the Massachusetts state Seal of Biliteracy to recognize students who have attained a high level of proficiency in English and another language.

One question we sought to answer in our analysis was “How many public high schools in Massachusetts require all students to study a foreign language in order to graduate?” 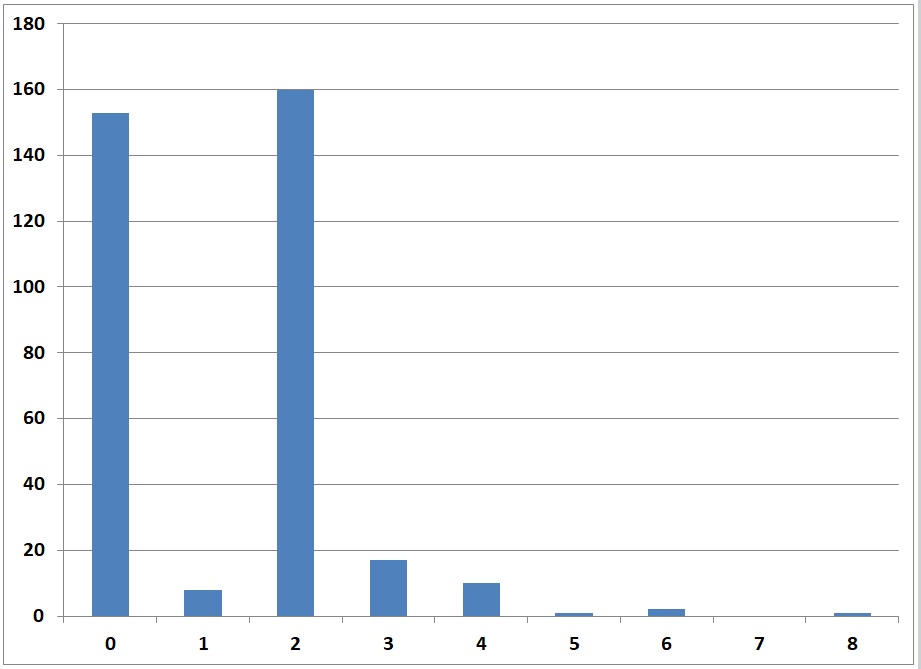 Number of Schools (y-axis) vs. Number of Years of Foreign Language Study Required for Graduation (x-axis)

The full results are summarized in the table below, including requirements for each of the four types of public high schools in our analysis. 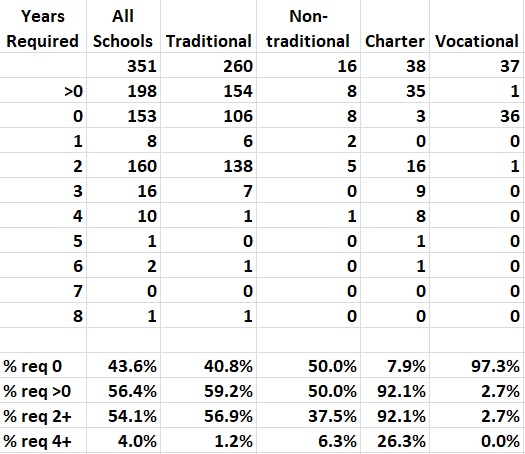