In the latest episode of the Creative Language Learning podcast,  host Kerstin Cable and guest Chuck Smith have a very interesting discussion of the newest language learning apps.   Since I am always looking for new resources to help with the Couch to Korean Challenge, I checked out the apps they talked about.  Today I will discuss my initial impressions of three of the new language learning apps that support Korean: Clozemaster, uTalk, and Amikumu (Chuck Smith is the creator of Amikumu).   In the podcast, they discussed two other apps that I will not review today.  Lingvist does not currently offer Korean, so I will wait until it supports Korean to take a look.  The Fluent Forever app sounds very exciting, but it is currently under development, so I will also have to wait to try that one out. 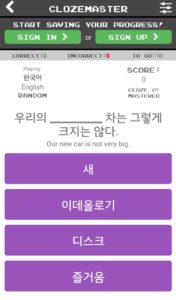 Clozemaster is a free app with the goal of helping users “Learn language in context. Clozemaster is language learning through mass exposure to vocabulary in context.”  The app does this by allowing a language learner to practice a language using fill-in-the-blank questions.  The app presents a sentence in the target language, with a missing word that you need to fill in.  The app provides a full translation in your known language, which does not have to be English.   You can choose either multiple choice or full text input as options for how to fill in the missing word.   Clozemaster supports a huge range of languages.  For Korean learners alone, it supports learning Korean as an English speaker, as a French speaker, and as an Arabic speaker.   For more common languages like French and Spanish, there are more than a dozen options (for example, learning French as a Mandarin speaker, or learning Spanish as a Bulgarian speaker).  The Clozemaster “Korean as an English speaker” unit has 1350 sentences to learn from, which is more than the 831 for Korean from French and 153 for Korean from Arabic, but significantly less than more common pairs like German from English (188,408 sentences) and Spanish from English (159,728).  Clozemaster is really well-designed and a lot of fun, and I have already added it to my rigorous training regimen for the Couch to Korean Challenge.   Successfully parsing and filling the sentences does require an intermediate reading level, so the app is not appropriate for beginners without a solid core vocabulary and grammar foundation.  And the sentences themselves can be a bit unusual, quite unlike typical textbook practice sentences; for example, two of the Clozemaster Korean-English sentences are “Mathematics is the part of science you could continue to do if you woke up tomorrow and discovered the universe was gone” and “The past can only be known, not changed.  The future can only be changed, not known.”  So you can get some philosophy with your language learning.

(Note that Clozemaster is a sponsor of the Creative Language Learning podcast, and you can use this Clozemaster link to view a special app tour by Kerstin Cable.) 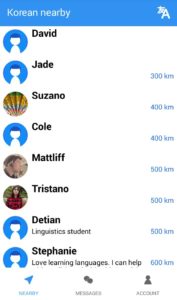 Amikumu is a free app that helps language learners to “Find language learning partners nearby – anytime, anywhere.”   When you set up your account in the app, you enter all the languages you know, with your current fluency level (native, high, middle, or basic) for each.  You can then select any of your languages and view a list of other Amikumu users who list that language, sorted by distance from you.  The Amikumu app requires that you provide your location and will only work if you enable location services on your phone.  Given the list of other app users, you can view user profiles to determine their fluency level in that language, and you can then message any of the users in the list, ostensibly to suggest joint language learning practice or exchange.   Amikumu is brand new, so the user base is still quite small, and it is quite heavily slanted toward Esperanto speakers because it was developed closely with the Esperanto community.  For example, even though I live in a city, the nearest Amikumu-using Korean speaker/learner to me is 300 km away.  Similarly the nearest Persian speaker/learner is 500 km away, and there are only 7 German speakers/learners within 100 km of me; however, there are 10 Esperanto speakers/learners within 10 km if I should ever decide to learn Esperanto.  In testing out the Amikumu app, I could easily see users who list a language in which they have some level of fluency, but I found it difficult to identify which of those users would be good candidates for language exchange.  For example, in my case I want to find native Korean speakers who are learning English and who would be willing to help me with my Korean while I help them with English; but all I see is a long list of users with some level of Korean knowledge, sorted by proximity.  In general, I think that Amikumu is a great idea for easily connecting like-minded language learners, and once the user base and app functionality expand, I expect it to become one of the essential apps for people seeking language learning partners.

uTalk is an app that advertizes that you can use it to “learn over 130 languages from any language, quickly and simply”.   It operates on a freemium model, providing access to very limited content for free and selling access to (or “unlocking”) additional content for $65/language, or $10/month for access to all languages.  Unfortunately the free content is so limited that I am not able to fairly evaluate the uTalk app (and I’m not willing to pay $65 to “unlock” the rest of the content).  Only one Korean topic (“Starter Words”) is available in the free version of the uTalk app.  I played around with the study options for this topic, which include several interactive multimedia games.  The games have tightly integrated audio and use a lot of visual elements, which is pretty interesting.  But it is impossible to determine how useful the games would be for extended study.  Like my initial negative experience with Duolingo Korean, uTalk has potential to be a useful resource but not in its current form.   I will check on it again in a few months to see if I am able to provide a more complete review.