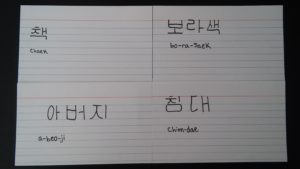 Flashcards hand-crafted by a L’il Lexplorer

Winter recess is drawing to a close, and the Lexplorers have been deep in preparation for our upcoming trip to Korea, including reserving our flights on Korean Air.   We started the winter recess with a team outing to a local Korean restaurant, followed by coffee and dessert at Paris Baquette (a Korean cafe chain that we have heard referred to as “Korea’s Dunkin Donuts“).    We have also spent a lot of time enjoying our Christmas gifts, a fun collection of new games, toys, books, and snacks.   One of our favorite surprise gifts was a set of Korean flashcards hand-crafted for us by one of the L’il Lexplorers.   She checked out a Korean vocabulary book from the library and secretly created a wonderful set of flashcards that has rapidly become a favorite resource for the Couch to Korean Challenge. 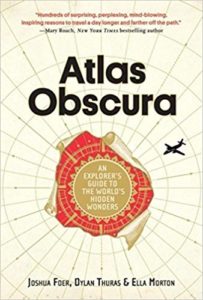 Another of our favorite gifts was a 2018 Calendar featuring highlights from Atlas Obscura: An Explorer’s Guide to the World’s Hidden Wonders.  Atlas Obscura is a fantastic book by Joshua Foer, Dylan Thuras, and Ella Morton, chock full of fascinating and out-of-the-way places and things to see around the world.   Highlights of particular interest to the Lexplorers are sites such as The Esperanto Museum in Vienna, The Gullah Heritage Trail in South Carolina, the Xul Solar Museum in Argentina, and The Whistling Island in the Canary Islands.   In addition to spotlighting interesting places, The Atlas Obscura site also has quirky and interesting news stories, such as How a Portuguese-to-English Phrasebook Became a Cult Comedy Sensation and The 17th-Century Language that Divided Everything in the Universe into 40 Categories and The Enduring Mystery Of ‘Jawn’, Philadelphia’s All-Purpose Noun.  We look forward to a full year of discovering new and obscure places. 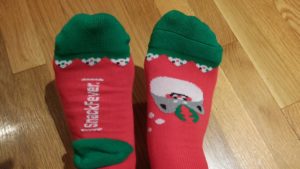 A surprise gift from Carlos to the rest of the Lexplorers team was a subscription to SnackFever (“A Monthly Mystery Box of Korean Snacks and Treats”).   SnackFever puts together a selection of snack food and other specialties from Korea and ships the box anywhere in the world, including to our doorstep.   This month’s box even included a bonus SnackFever canvas bag and a pair of red and green Christmas-themed socks.  The treats themselves were a very fun sampling of familiar and unfamiliar flavors and textures.   There was a Choco Pie Chocolate Chip Cookie Pie, which was very similar to a Moon Pie with a little extra jelly in the marshmallow center.  There was a hazelnut chocolate bar, a latte-flavored chewy caramel, and a crispy waffle.   But among the familiar, there were some new flavor combinations, some good and some not quite so popular among our taste testers.   We selected our three favorite and three least favorite from the SnackFever box:

Banana Flavor Funny Straw: This is a straw with banana candy inside it.  When you sip milk through the straw, the milk dissolves the banana candy and you get a rush of sweet banana-flavored milk.  This one was a big hit with the L’il Lexplorers.

Malang Cow Candy Yogurt: We were skeptical at first, because these pillow-shaped candies looked exactly like the ubiquitous individually-wrapped wedding “buttermints”.  However, the Cow Candy Yogurt candy was actually pretty good. 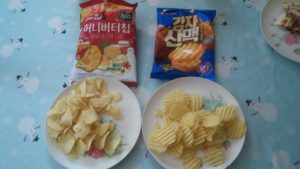 Sour Cola Gummies: We love gummies and especially sour gummies.  It is actually a long-time Lexplorers tradition to get a big bag of Sourpatch Kids whenever we go to the movies.  And we have been known to enjoy a cola beverage once in a while.  But cola-flavored sour gummy candy is not a welcome combination.

Thanks to Carlos, we have more SnackFever to look forward to in 2018.  We will happily sample the Korean goodies and report our findings.