On Giving a Speech in Another Language 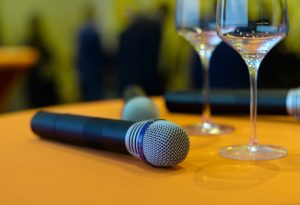 A little over a year ago, Carlos told me he was planning to get married in Korea and that he wanted me to be there.   At the time, I knew very little about Korea and even less about the Korean language.   But I saw a golden opportunity for an adventure, to take on a new challenge and to learn a new language.   So I told Carlos that not only would I happily come to his wedding, but I would also study Korean and give a speech in Korean at the wedding.  Thus began the Couch to Korean Challenge, in which I tried to learn as much Korean as possible in the course of the year, in preparation for visiting Korea and for giving a wedding speech in Korean.

I made the speech commitment for one simple reason: motivation.  Being able to communicate when visiting a place is very important, but tourist-level communication does not require learning the local language; it is usually enough to learn a few essential phrases (combined with hand gestures and maybe some simple English).  On the other hand, standing up in front of hundreds of people and giving a speech in their language is quite intimidating and provides a much stronger motivation to actually learn and understand the language!   And I wasn’t planning a “read a few canned phrases from the teleprompter” kind of speech.  I wanted to speak Korean for 3-5 minutes in front of a big crowd of native speakers, with no cue cards and no written notes.   I knew it would take a lot of work, and that was the background motivation throughout the year-long Challenge.

I recently reached the finish line of the Couch to Korean Challenge and made the much-anticipated trip to Korea, including giving the wedding speech in Korean.  I will probably get around to writing up a full postmortem of the Challenge and how well the year of study translated to real-world communication in Korea.  But for now the burning question is, How did the speech go?

Before getting to the speech, it is instructive to go back to the beginning, when I embarked on this quixotic quest to learn Korean in a year.  In the first couple weeks of the Couch to Korean Challenge (late February 2017), I learned the Korean writing system and the simple mappings from characters to sounds (but hadn’t yet learned the phonology and context-dependent sound change rules).   And then I tried to read some Korean words.  It was slow, and it was painful.  Luckily I captured the pain for posterity.   The audio clip below was me a year ago, in my first attempt at reading Korean words, with Carlos trying hard not to laugh at me: 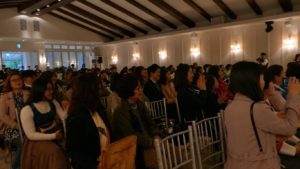 Fast forward through a year of learning Korean grammar, studying vocabulary, reading, listening, and eventually speaking.   A week before the trip, I wrote the wedding speech in English and translated it into Korean, then I had a native speaker provide detailed feedback on the grammar and pronunciation.  I revised the speech a few times, and then practiced (a lot!).  I was ready, and I hopped on my flight to Korea.  When the time came, I went to the front of the wedding hall, grabbed the microphone, looked out over the sea of 200+ Korean faces, and started.

I introduced myself in Korean and got a round of applause, and I thought, “What a great crowd!  This is a piece of cake, it will be fun!”   Then I choked.  My brain short-circuited, and I blanked.  I started the first sentence, which I had practiced a dozen times, and instead of fluent Korean, out came bumbling, unintelligible word soup.   As sympathetic laughter rippled through the crowd, I took a deep breath and started over.  I introduced myself in Korean (again) and got (another) round of applause.  From there it went a lot smoother.  I talked for about 4 minutes, and the crowd seemed to understand most of what I was saying.  There were a couple more rounds of much-appreciated applause, and they even laughed at the joke I told (about the wedding being at the New York New York Wedding Hall, which was quite a bit farther from home than the real New York, New York).  I’ll tell you, there is nothing more gratifying than telling a joke in your non-native language and having people laugh with you (rather than the much more common language-learner experience of people laughing at you)!  All told, the speech went very well despite the rocky start, and it was a fitting capstone to the year of study leading up to it.

Here is the full audio of the wedding speech, starting with the bumbling word soup (the New York joke is at about 1:30):