Book Review: Round Ireland With a Fridge 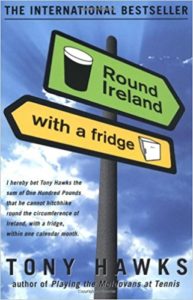 Round Ireland With a Fridge

The Lexplorers summer reading list included a fairly diverse range of topics, from our usual linguistics and language learning, through recent bestsellers, as well as a little pure beach-reading fluff.   But one clear cluster was books written by people who had a travel adventure that we would never even contemplate attempting.   In the coming weeks we will be bringing you our reviews of a few of our favorite “What Were They Thinking? travel adventures”.    First up is Round Ireland With a Fridge by Tony Hawks (the English comedian, not the skateboarder Tony Hawk).

Round Ireland With a Fridge is about, well, exactly what the title says: the author made a (drunken) bet with a friend that he could hitchhike around the entire circumference of Ireland, lugging a (small) refrigerator the entire time.   Along the way he had many unexpected adventures and met many Irish characters (mostly in pubs, as one might expect in Ireland).   The resulting book is a very fun and funny travelogue, firmly on the Explorers side of Lexplorers.  However, given the fact it was written by an Englishman traveling in Ireland, there were many Lex- items that piqued our interest.

One particular languagey item we found interesting was the apocryphal fact, which the author first heard in a pub but repeated frequently as fact, that “England and Portugal are the only European Union countries with no minority languages.”   This may make for good conversation in a pub, but it is demonstrably false.  If we define a minority language as one spoken by a minority of the population in a country, England has Welsh, Irish, Scots, and a large number of languages spoken by immigrants, both from Europe and from former British territories. The languages in Portugal are primarily dialects of Portuguese, but minority languages include Mirandese, and Portuguese Sign Language (not to mention Spanish).   There is a European Charter for Regional or Minority Languages (ECRML), which protects and promotes historical minority languages (vs. languages of recent immigrant groupts).  Portugal is not a signatory to this agreement, but neither are Ireland or Belgium or Greece.

As we read Round Ireland With a Fridge, we came across many British and Irish words and phrases that were unfamiliar and that we needed to look up.  A sampling of some of our favorites:

One final note about Round Ireland With a Fridge.  The trip took place in 1997, and earlier this year Tony Hawks attempted to crowdfund a 20th anniversary trip to Ireland with the fridge in order to thank the people he met on the first trip:  “I’m going to dig out the notebooks I filled when I hitched around Ireland before and make a list of all the people who helped me. Then I’m going to track each one down and come up with a unique way of thanking them.”  Sadly this return trip appears to have been abandoned.  The fundraising site for “Once More Unto the Fridge” now redirects to a fundraising site about a skateboarding book: The A to Z of Skateboarding