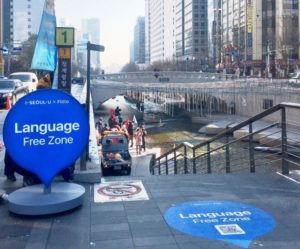 The South Korean hosts of the PyeongChang Olympics have created what they are calling a “Language Free Zone.”   According to the Korea Tourism Organization press release:

A Language Free Zone has been set up along Cheonggyecheon Stream, allowing international visitors to gain access to more information while traveling in Seoul.

By utilizing a translation platform, Language Free Zone provides translation of notices and signs written in Korean or English into other languages.

The Lexplorers obviously support the intent of helping International visitors to be able to read notices and signs.  However, “Language Free Zone” is a very poor choice of words to describe such an effort.   The phrase itself is ambiguous.  Is this a zone that is free of languages, an area in which no languages are allowed?  Clearly not, since 11 languages (Korean, English, Chinese, Japanese, Indonesian, Thai, Vietnamese, Russian, French, Spanish, or Arabic) are explicitly supported within this Zone.  But that is the intuitive parse that comes to mind (our native English-speaking minds, at least), possibly because of the well-known airport “duty-free shop,” a shop where you do not have to pay duties or taxes. 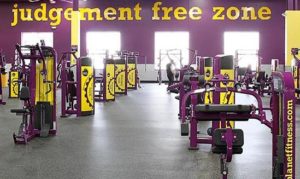 This parse is similar to the Planet Fitness ad campaign for a Judgement Free Zone, a “non-intimidating, welcoming and supportive environment,” or a zone that is free of judgement (or judgment as most people would spell it).  This is also similar to the parse of Conflict Free Diamonds, diamonds that come from areas that do not have ongoing conflicts.

But how else can you parse “Language Free Zone”?   The other meaning that comes to mind is a Free Zone related to languages.   A Free Zone is an area within a port where goods can be stored without paying the import duty.  So is a “Language Free Zone” a Free Zone where languages can be stored?  No, of course not.   There are free economic zones and free trade zones where commerce can happen without governmental interference, but a “free language zone” also doesn’t seem to be quite right.

In the end, “Language Free Zone” is not only ambiguous, it also doesn’t accurately describe what the Olympic hosts are (admirably) offering.   Really what this zone is free of is not language itself, but rather the stress of being a visitor and not being able to understand something because you don’t speak or read the language.   Unfortunately there is no pithy phrase you can slap on a sign: “Zone Set Up to Help Visitors Who Can’t Read Korean or English” just doesn’t have the conciseness of “Language Free Zone.”  So despite the linguistic problems with the phrase “Language Free Zone,” we applaud the Olympic hosts for trying to help visitors overcome the language barrier.