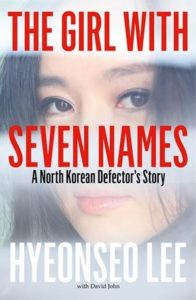 The Girl With Seven Names: A North Korean Defector’s Story

Next up in our series of Lexplorers reviews of “What Were They Thinking? travel adventures,” today we discuss The Girl With Seven Names: A North Korean Defector’s Story (alternately subtitled “Escape from North Korea” in the paperback version) by Hyeonseo Lee.  This book is a good companion to Wendy Simmons’s My Holiday in North Korea, which describes North Korea from the viewpoint of an American tourist.  The Girl With Seven Names is an autobiographical account of Hyeonseo Lee’s early life in North Korea and her escape to South Korea via China.  It is unfair to some extent to include this book with travelogues about voluntary travel adventures, since the experience of a refugee is nothing like that of a tourist.  However, like a good travelogue, The Girl With Seven Names introduces the reader to places and people that would otherwise remain hidden and inaccessible.

The Girl With Seven Names begins with a story from the author’s childhood, in which her family barely escapes from a fire that destroys their house.  While the fire is still raging, her father risks his life to rush back into the flames and rescue the family’s two most important possessions: portraits of Kim Il-sung and Kim Jong-il.   Every North Korean family must have these two portraits on a wall, and the images must be cleaned every day with a special cloth; Government officials inspect houses regularly, and anyone found without the portraits, or even with dusty portraits, may be deemed disloyal and suffer consequences ranging from fines to imprisonment.  This story sets the tone for the first part of the book, a detailed and bleak description of the day-to-day life in Hyesan, North Korea, where the author grew up.  Lee describes the extreme brainwashing and propaganda that is part of North Korean life, combined with the chronic shortages of food, heating fuel, and other essential supplies.   She was able to avoid the worst of the conditions due to her father’s connections to the North Korean military and her mother’s successful smuggling business.   However, as a child she witnessed deaths by starvation, public executions of “state enemies,” and the desperate struggles of families to survive in North Korea.

Like most people growing up brainwashed with no access to alternate viewpoints, Lee was relatively happy with her early life, and she did not want to leave her family or her country.  She did not plan to escape or defect out of any principled belief; she simply became an accidental refugee.   In an act of naive teenage rebellion, one night she snuck across the river planning to visit distant family in China.  Once there, she was not able to return home to North Korea.  In the second part of the book, Lee describes her journey of discovery across China as an undocumented refugee.  Along the way she learns to accept a different reality from the one foisted upon the unwitting people of North Korea.

Lee’s story is really a classic refugee story: change the names of the countries and the languages spoken, and the same story could take place in many other places around the world.  In such a story, leaving the country of birth is only the first challenge for the refugee.  The subsequent challenges can be even more daunting: finding a place to live and work in a foreign country as an undocumented foreigner, learning the language, avoiding detection and likely repatriation, and dealing with the inability to see or even communicate with family back home.   In Lee’s case, she was lucky to live in a North Korean city across a shallow and narrow river from China, and she was greatly assisted by the presence of family in China who could help shelter and support her.   She was also helped by the South Korean policy of providing citizenship and financial support to North Korean citizens who reach the South.

Lee worked hard to overcome the adversity and isolation of her situation.  She learned Mandarin well enough to pass as a native in China.  She worked unpleasant jobs and saved money.   She assumed new identities (the “Seven Names” from the title of the book) whenever she needed to escape the circumstances of the previous one.  She was also extremely lucky, a factor that should never be discounted.   She made many bad decisions along the way, starting with the initial walk across the river to China with no plan at all.  She had dozens of close calls, any one of which could have resulted in her forced expulsion back to North Korea, which would unlikely have ended well for her.  In one case, desperate and completely at the end of her rope, she was handed a wad of cash by a mysterious Australian man; were this a work of fiction, the reader would likely scoff at such a far-fetched plot device.   In the end, after years of hard work, close calls, and luck, Hyeonseo Lee was successful in navigating the refugee gauntlet and was ultimately able to write this book about the experience.  There are thousands of other stories that will sadly never be told because the authors did not have the right combination of perseverance, connections, and luck.   But we are very glad that Hyeonseo Lee completed her long, harrowing journey and wrote this book about the experience.