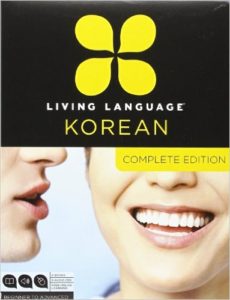 Living Language is one of the big names in independent-study language courses.  When I started studying German many years ago, I spent an entire summer with the Living Language German course.   It was divided into 40 lessons, each with a set of vocabulary words that were recorded in both English and German on the included CD set.  This allowed me to go for long walks and learn words along the way.  Some of the content was extremely dated (e.g, old-timey phrases like “Gnädige Frau” are not at all useful in modern German), but in general the lessons and vocabulary were well-organized and easy to follow.

Years later when I first started learning Persian, one of my favorite resources was the Living Language Persian Spoken World: Farsi set.  Like the German course that I had enjoyed, the Persian course had a well-organized set of lessons.  The audio CDs had the vocabulary words in both English and Persian, and they also had recordings of sentences and grammar examples from the course book.  For both the German and Persian courses, the most useful part was the clear connection between the words and sentences in the book and the recorded versions on the audio CDs, plus the fact that much of the audio was given in both English and German/Persian so I could listen and study new vocabulary anywhere. 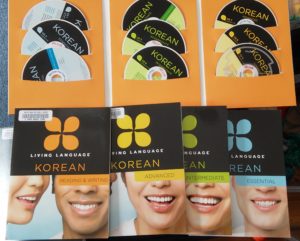 First, the good: the Living Language Korean, Complete Edition comes in a big box and appears to be extensive.  It includes 3 separate Living Language Korean sub-courses: Essential, Intermediate, and Advanced (each normally sold separately for $20-$30).  Each course includes 3 CDs and a course book.  The full Complete Edition contains 9 CDs and 3 course books, plus a blank notebook and a book for learning the Korean writing system.   All this can be purchased for about $50 on the Living Language site or $30 on Amazon.    On the surface, this would seem to be a good value, and if the course had been as good as the German and Persian courses, I would happily have spent the $30.   But it is not worth $30, and certainly not $50.   Luckily, I was able to explore the course for free at the library, which tempered the disappointment somewhat.

So what is wrong with the Living Language Korean course and why would I not recommend it?  In short, and to put it bluntly, the Living Language Korean course is a mess.    For starters, the book is laid out more like a novel than a textbook;  rather than having clearly-defined sections with informative headers, everything runs together across section and page boundaries.  There are typos everywhere, in both English and Korean.  The answer keys to lesson exercises contain obvious and egregious errors.  The romanization of the Korean writing is inconsistent.   Each lesson has components like “Vocabulary Builder” and “Vocabulary Practice” and “Take It Further” and  “Grammar Builder,”  but there is no logical flow to the lesson components and the content of these components is not consistent from one lesson to the next.  Even worse, there is no clear mapping from the written components to the audio tracks, so it is very difficult to find the audio examples that correspond with the written text.

At the very least, I expected each Living Language Korean lesson to have a good vocabulary list with an English+Korean audio track that I could use to learn new words.  That was my favorite part of the other Living Language courses, and that in itself would make the “Complete Edition” worth the investment.   But the course does not even have useful vocabulary lists, written or recorded.   The vocabulary lists in the lessons are short and disjointed;  rather than lists of important words, they also contain phrases and even full sentences (or worse, partial sentences like “My name is….” with no explanation of how to correctly fill in the blank).   The grammar sections and sample sentences are similarly lacking.  For example,  I would expect that the sample sentences in an “Essentials” book would be simple and appropriate for beginners.  But the “Essentials” lessons of the Living Language Korean course have complex sentences with not-at-all-essential vocabulary,  along the lines of “I have a business connection at a multinational conglomerate.”