Yes We Have No Bananas

One of the most basic and most important types of human communication is the ability to convey agreement and disagreement: facial expressions like the smile and the frown, head movements like the head nod and head shake, hand gestures like thumbs up and thumbs down, and word pairs like yes and no, aye and nay, uh huh and uh uh, true and false, yup and nope.  In linguistics, these opposing ways of communicating polarity are known as “affirmative and negative“. 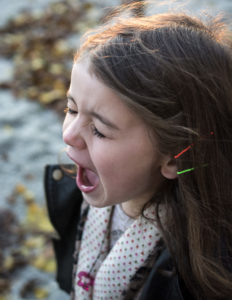 Children learn words and gestures for yes and no very early (with no being the clear favorite, practiced loud and often).  For adult learners,  affirmative and negative words and phrases are essential vocabulary at the very beginning of learning a new language, along with greetings and pleasantries like Hello, Please, and Thank You.  As I embarked on the Couch to Korean Challenge, I had not anticipated any problems learning the Korean words for yes and no and their uses in conversation.   It turns out there are two particular quirks in Korean that can make yes and no a bit challenging for us native English speakers.

The first quirk is that the Korean word for yes is 네 (/ne/), which sounds an awful lot like the English negative word nay.   No matter how many times I listen to the audio samples from Korean textbooks and reference books, I am having a very difficult time hearing 네/ne and thinking “yes”!   With all the possible two-phoneme sequences available, it is unfortunate that /ne/ is the one that means yes.  But with some practice I will get used to it.

The second quirk with Korean yes and no is a bit more subtle but even harder to get right, especially combined with the ne = yes problem above.  It involves answering negative questions, such as “You aren’t confused, are you?”   In English, you would answer “No, I am not confused” or “Yes, I am confused.”   But in Korean you reverse these answers and say “Yes, I am not confused” or “No, I am confused.”   (There is a detailed article on Organic Korean called Yes I Can’t that discusses responses to negative questions in Korean.)   The reasoning seems to be that you are saying “yes” to confirm what the person says, as in “Yes, I confirm your statement that I am not confused.”  But this reversal of the English convention, plus the ne = yes confusion, causes extra difficulty with simple conversations (and brings to mind the Monty Python Knights Who Say Ni):

Do you speak Korean?

But you aren’t from Korea?

Do you also speak English?

But you aren’t a native speaker?

Some languages have a distinct word for replying in the affirmative to a negative question, so that instead of overloading “yes” and “no” you can reply with a word that means essentially “on the contrary.”  I came across a very interesting old thread on wordreference.com that posed the question “In your language, do you have a word which means yes, but to a negative question?”   And based on the many replies, there is such a word in diverse languages from Persian to French to Mandarin.  My favorite example of the extra “on the contrary” word is German, which can pack some very 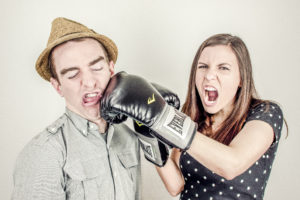 complex semantics into the one-syllable word doch.  In addition to ja and nein, the simple responses to yes/no questions, doch is used to contradict negative questions:

Du würdest mich nicht schlagen, oder?  (“You wouldn’t hit me, would you?”) 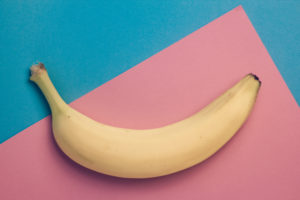 As I wrestled with the Korean affirmative and negative, I couldn’t help thinking of Yes We Have No Bananas, a classic American novelty song about a Greek shopkeeper who never answers “no” when asked if he has something in stock.   He always answers “yes” but then tries to sell something that he actually has in stock.

There’s a fruit store on our street, It’s run by a Greek.

And he keeps good things to eat,

But you should hear him speak.

When you ask him anything,  never answers no.

He just yeses you to death, and as he takes your dough he tells you

It is a funny song, primarily because of the nonstandard use of yes in a negative reply, and it shows the surprising complexity and versatility of yes and no, even in English.  Luckily, the Korean word for banana is 바나나 (/banana/), so ne, I have no trouble with banana today!