At the Corner of Thingvalla Ave. and Ericsson St.

Walking through a nearby neighborhood in Cambridge MA, I often pass Thingvalla Avenue, and I have been curious about the origin of the name. 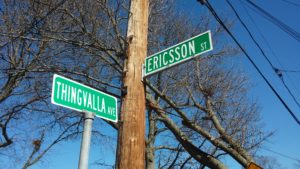 Thingvalla is not a traditional English-sounding name, and it stands in sharp contrast to adjoining Cushing and Exeter Streets.   Its intersection with Ericsson Street should have provided me a good clue as to the origin of Thingvalla, but I didn’t really think about it much until recently when I was reading a series of mystery books set in Iceland and written by Arnaldur Indridason (actually Indriðason since the Icelandic writing system still retains the eth ð).   In the Indridason books there were frequent references to the historic site in Iceland called Thingvellir (or Þingvellir since Icelandic also retains the thorn Þ).   The similarity of Thingvellir to Thingvalla seemed like it couldn’t be an accident, but how could an Icelandic name end up on a street in Cambridge MA?

This week I set out to finally satisfy my curiosity.  I spent a morning in the Cambridge Room at the Cambridge Public Library.   Archivist Alyssa Pacy kindly helped me unravel the Thingvalla mystery, and along the way I learned a very interesting story.

Ms. Pacy first pointed me to a detailed online history of Cambridge Buildings and Architects, where I read that Thingvalla Ave. was “named for Icelandic parliament site.”   Which made sense, but why was it named so?   There was an additional note in the Thingvalla Ave. entry:  “Horsford Norse exploration theory”.  Norumbega St. and Ericsson St. (“named for Ericsson Lief, norse explorer”) were two other Cambridge streets with the same cryptic note.  Ms. Pacy explained that Eben Norton Horsford had been a Harvard professor who wrote several books about alleged Norse settlements on the Charles River near Boston.  She then went into the physical archives and handed me a large stack of the original books that Prof. Horsford donated to the library in the 1890s. 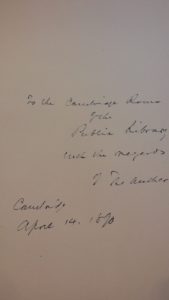 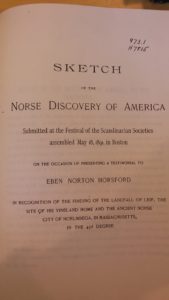 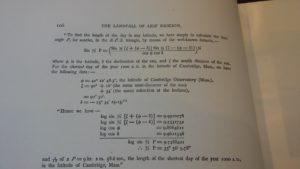 The Horsford books are fascinating historical accounts of the alleged discovery of America by the Norsemen around the year 1000, almost 500 years before Columbus.   Horsford argued that Vinland, the settlement founded by Leif Erikson (“Erikson” because he was the son of Erik the Red) and described in the Norse Vinland Sagas, was actually located in what is now Cambridge MA.  Horsford claimed to have found Vinland building foundations and artifacts along the Charles River in Cambridge.  Being a scientist, he even included a mathematical proof that Vinland could only have been in Cambridge, based on a complicated formula involving the length of the day reported in the original Sagas, the angle of declination of the sun, and the latitude of Cambridge.

Horsford also wrote in detail about how Watertown MA,  just up the Charles River from Cambridge, was the “site of the seaport of a Norwegian colony, the ancient city of Norumbega.”

Horsford sounds like an interesting character.  He was a Harvard Professor of Application of Science to the Useful Arts and invented a new formulation for baking powder, the versatile baking and cleaning product.  He then founded the Rumford Chemical Works and made a fortune manufacturing and selling the baking power; Rumford is still one of the most popular baking powder brands in the US today.   In addition to his scientific and historical writings, Horsford added amateur linguist to his collection of avocations and wrote extensively about Native American languages in New England.   His goal primarily seemed to be to insert spurious Norse origins into Native American names, in order to bolster his other fantastical claims about Norse settlements in the area.    For example, he attempted to rewrite the history of the Algonquian word Norumbega by claiming that it actually derived from the Norse word for Norway (Norvega).  In another of his books, Horsford claimed that “the natives of Vineland” could not say the Norse word Eirikr “without prefixing an m.”  And so, much to the dismay of Amerigo Vespucci, an epenthetic /m/ is the true origin of the name America (according to Horsford).

Horsford was a chemist, not a historian or linguist, and his historical writings have been soundly rejected and marginalized by actual historians.  However, in his day Horsford was influential (and rich), so his legacy lives on in the Cambridge area.   You can still see the plaque he placed in Cambridge marking the exact spot where “Leif Erikson built his house in Vineland.”   He was instrumental in the erection of a statue of Leif Erikson in Boston.  He even built the 38-foot-tall stone Norumbega Tower in neighboring Weston MA at the supposed site of the Norse Fort Norumbega.  Wellesley College named a building Norumbega Hall in 1886 in honor of Horsford’s financial contribution to the college (and John Greenleaf Whittier wrote a poem for its dedication), and the Wellesley academic quad is also known as Norumbega Hill.   And, of course, Horsford convinced the City of Cambridge to name three streets: Thingvalla Avenue (in honor of the Icelandic Thingvellir site), Ericsson Street (in honor of Leif Erikson, but with a non-standard spelling of the name, for some reason), and Norumbega Street (in honor of the legendary Norumbega settlement).

Fortunately you don’t need to go the Cambridge Public Library to enjoy the writings of Eben Horsford, although I highly recommend you visit the Cambridge Room if you have the chance.  Many of his original writings have been scanned by the Google Books project and can be browsed online (here and here, for example).  Some of his works have also been republished in modern versions and are available at libraries or on Amazon (for example, here or here).

I wasn’t the first person to wonder about why there are Viking names and monuments in the Boston area, and I found some nice articles online with lots more detail than I have included: