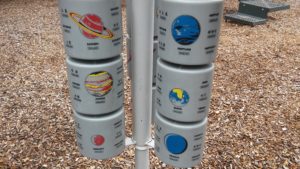 The Lexplorers are always on the lookout for public multilingual displays, such as the neighborly and friendly signs that have been popping up in the area.   At the local playground last week, I was happy to stumble upon a set of spinny cylinders showing the planets of the solar system, with the planet names in English, Japanese, Chinese, German, Spanish, French, and Korean.  In addition to enjoying a summer day in the park,  I took the opportunity to make some progress on the Couch to Korean Challenge by learning the planet names in Korean.  Having also recently learned the months and days of the week in Korean, I was fascinated to discover that there is a connection between the planets and the days of the week.

All Korean planet names, except Earth, contain 성 (seong), which comes from the Chinese word for star.  The Korean names of the original planets (Mercury through Saturn) combine 성 (seong) with words for classical elements (also from Chinese): 수 (su = water), 금 (geum = gold), 화 (hwa = fire), 목 (mog = wood), and 토 (to = soil).  These same core elements are added to 요일 (yoil = day) to form the names of the Korean days of the week.

The other two days of the week are also named after heavenly bodies: 일 (il = sun) for Sunday and 월 (wol = moon) for Monday (“Moon Day”).

Interestingly, the order of the planets used for Korean days follows the original order of the Greek and Roman Gods from the ancient Hellenistic astrology:  Sun, Moon, Mars (Ares), Mercury (Hermes), Jupiter (Zeus), Venus (Aphrodite) and Saturn (Cronos).  This is logical since the Korean names and order came from the Chinese names and order, which in turn came from the ancient Hellenistic system.  This same order is also still found in the Romance languages (except Portuguese), where the Latin names were retained (except Sunday, which was replaced with a form of Dominica “Day of the Lord”,  and Saturday, which was renamed for the Sabbath).  Spanish, for example, has domingo and sábado but also lunes, martes, miércoles, jueves, and viernes.    The Germanic languages substituted the Germanic gods for the Roman ones, which is how English ended up with Tuesday (for the Norse Týr), Wednesday (for Woden / Odin), Thursday (for Thor), and Friday (for Frige).

I delved a bit into the history of English month names when I wrote about Noruz (the Persian New Year).   The English month names have a complicated history, with the current 12 names coming either from names of Greek and Roman gods or from Latin ordinals;  English learners need to memorize the 12 month names since there is no easier way to learn them.   In contrast, Korean month names are a piece of cake once you know the Korean numbers.   The Korean word for month (and moon, not coincidentally!) is 월 (wol).   And the names of the 12 months are simply the (Sino-Korean) numbers 1 through 12 plus 월.  So January is 1월 (일월 or il-wol) and June is 6월 (유월 or yu-wol).

There are some fun combinations of the common elements in the Korean words for planets and dates.  For example, Jupiter (목성 / mog-seong = “Star of Wood”) is currently visible in the evening sky, and today is Friday (금요일 / geum-yoil = “Gold Day”) on the day June 30 (6월 30일  = “Six Moon Three Ten Sun”).  If we were to say we were

…looking for Jupiter on Friday June 30

The literal meaning of the Korean translation of this would be:

For further reading, the Wikipedia article on names of the days has the full fascinating history of day naming systems in many languages.  The Let’s ROK and Roll blog also has an interesting post about the Korean names for all the objects in the Solar System.