Counting in Korean: A Myriad and 18 Challenges

In the early weeks of the Couch to Korean Challenge,  I have been focusing exclusively on evaluating Korean resources and on learning the fundamentals of the Korean writing and sound systems.   This has been a conscious plan, in order to maintain the pure experiment of systematically learning the language from scratch. I have enjoyed learning the basics, but I am itching to learn some Korean vocabulary and grammar.   To continue the Couch to 5k running metaphor, I have been reading a lot about the theory and history of running, and retying my sneakers using different knots, and measuring out good training courses, but I haven’t actually done much running. 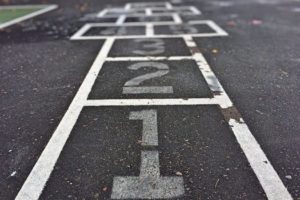 I thought the Korean numbers would be a good place to start for vocabulary.   Learning the numbers in a new language is usually easy and very useful in the early days of vocabulary and grammar acquisition.  There is a small set of essential words for numbers less than 100, and larger numbers can be constructed in a predictable manner from this set of basic number words.  Knowing the numbers can then help greatly with subsequent learning of other important numerical phrases, including dates, times, measurements, street addresses, and phone numbers.

Although numbers such as sixteen and ninety are written as a single word, they need not be learned as separate words since they are simply composed of the digit words 1-9 and the suffixes -teen and -ty.   You could reasonably argue that words like thirteen and fifty also do not count as distinct words to be learned, since they are easily constructed from known words,  with a minor phonological change.   So three+teen becomes thirteen, and three+ty becomes thirty.  Similarly five+teen becomes fifteen and five+ty becomes fifty.  In this case, the number of distinct English number words required would be reduced to just 18.

All larger numbers in English can be constructed from simple combinations of these 22 (or 18) words and suffixes.   For example, even a long, complicated-looking number like 812,735,941 is just “eight hundred twelve million seven hundred thirty five thousand nine hundred forty one.”

I figured that if Korean had a system like English, I could learn about 20 new words and feel like I had at least made a start on Korean vocabulary.  I had an hour to kill recently sitting in a waiting room without reading material, so I downloaded an app for my phone called “Learn Korean Numbers, Fast!” which sounded like exactly what I needed.  It had a nice simple interface with flashcards and embedded (albeit poor quality) audio, and it was free.   I was off and running.

As it turns out, Korean does have a number system that requires learning only 13 number words.    BUT, it ALSO has a second number system, which requires learning an additional set of 18 words.  The number composition rules for both systems were quite straightforward, so in my allotted hour I was able to learn the 31 words for both systems.   With some additional practice later on, I was able to count to 100 in both systems and also put together some larger numbers into the millions.  That was the good news.  (That plus the fact that Korean uses the familiar Arabic numerals, so I did not need to learn new characters for the digits 0-9.) The bad news was that the two systems seem to be used in different contexts within the Korean language, so learning both number systems is only the first step.  Learning which numbers to use in which contexts is a much more difficult challenge.

The first number system used in the Korean language came to Korea from China and is known as the Sino-Korean number system. Learning it requires just 13 words, about half as many as English numbers.

To get into the millions, you only need:

One interesting aspect of the Sino-Korean number system is that for large numbers it is based on the myriad.  In modern English myriad has come to mean “a multitude or a countless number,” but the word derives from the Ancient Greek μυριάς / myrias, meaning “ten thousand.”   In the Ancient Greek number system, as well as in those derived from the Chinese system, large numbers are named as powers of 10,000 instead of powers of 1,000.   For example, instead of having a separate word (like the English million) for 1,000,000, this number is “hundred myriad.”

In English, the words for numbers above 1,000 progress as follows:

In the Sino-Korean system, these same numbers are:

I was successful in learning the 31 number words in the Sino-Korean and Native Korean number systems, so I nominally now have a vocabulary of 31 Korean words.   Unfortunately, they won’t really do me much good until I get deeper into the Korean vocabulary and grammar.  From my first read through a few textbooks and some of the pages listed below, both number systems are widely used, and there is no simple way to know when to use which system (beyond memorizing and practicing).  For example, when telling time, the hours are counted in the Native Korean system but the minutes are counted in the Sino-Korean.  The Sino-Korean numbers are also used for the names of months, money, phone numbers, and measurements.  The Native Korean numbers are used for age and for counting many categories of things (but not all).   Korean has a complex system of “counter” words (or particles) that attach to numbers.  There are different counter words for a wide range of countable things, from trees and animals to money and distances.  Some counter words require numbers from the Sino-Korean system, and other counter words require numbers from the Native Korean.  Figuring out what to do with these 31 words will be a non-trivial task, which I am putting off to a future study session.   For now I’ll have to be satisfied in having increased my Korean vocabulary from 0 to 31.

One final lesson from my initial foray into the Korean number system: Beware the Number 18!  In writing about my first impressions of the Korean sound system, I noted that my primary struggle has been distinguishing and correctly generating the three degrees of consonant aspiration and tenseness.  This took on particular urgency when I saw this note next to the number 18 (십팔 / sippal) in the Korean From Zero number lesson.

“NOTE! The word 씨팔 in Korean is the same as the “F” word in English. So don’t put too much emphasis on the first ㅅ sound”

It will clearly behoove me to learn and practice the difference between lax 십팔 (sippal) and tense 씨팔  (ssipal), lest my lax pronunciation lead to a tense situation.   I imagine Korean learners of English have a similar problem with the English word sit,  since Korean phonology transforms an /s/ followed by /i/ into /ʃi/.   But these kinds of “inadvertent obscenities” are unavoidable when learning a new language, so I prefer to accept that they will happen and embrace the humility that these situations require.

For more detailed discussions of the Korean number systems and some nice clear tables of the numbers, I found the following sites useful: