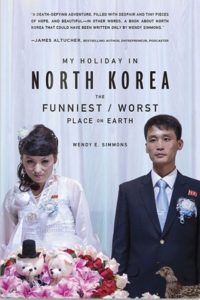 My Holiday in North Korea: The Funniest/Worst Place on Earth

Continuing our series of Lexplorers reviews of “What Were They Thinking? travel adventures,” today David and Carlos discuss My Holiday in North Korea: The Funniest/Worst Place on Earth by Wendy E. Simmons.

David: I thought that Tony Hawks was a bit crazy to hitchhike around Ireland with a fridge, but Wendy Simmons tops him in every respect with her account of her 10-day solo trip to North Korea.   My Holiday in North Korea is a fascinating, and at times terrifying, view into a world that almost none of us will ever see personally.  I still can’t believe Simmons took this trip, survived it, and was able to come back and write this book (especially since her trip was in late June 2014, exactly at the time when the release of the movie The Interview was making the situation especially dangerous for Americans in North Korea).  The stories she tells about her experience, combined with the photos she took during the trip, give the reader a view into the bizarre and absurd life in North Korea.  A really nice touch was that each chapter of the book starts with an appropriate quote from another absurdist classic: Lewis Carroll’s Alice’s Adventures in Wonderland.  The first chapter sets the tone with the quote

Carlos:  I felt that My Holiday In North Korea hit me with equal amounts of joy and sadness.  The book was filled with stories that baffled me, but it was hard to enjoy the crazy comical anecdotes without feeling deep sadness for the people of North Korea.  As some of you might know, my girlfriend (actually, *spoiler alert* fiance!) lives in South Korea, and I have visited her there 3 times now.  Having spent some time in Korea, and learning more about the struggles between the North and South, I find myself feeling much more empathetic to the current situation.  So while I would love to marvel and “enjoy” the almost constant comedy in this book, I can’t help but feel bad for the innocent helpless citizens in the North, who don’t get much choice in how they live.

David: I don’t have the first person experience in South Korea that you do, at least not yet (hey, I can do that too: *my own spoiler alert* we’re going to visit in April 2018!), so I was probably better able to enjoy the funny parts.   But I definitely felt sad for the people and the propaganda and manipulation they are forced to live with.  Simmons saw this through the carefully choreographed events she witnessed during her visit.   I thought the cover picture, and the story behind it, was a perfect example of this absurdity.  Simmons and her handlers went to a restaurant for lunch and there “just happened to be” a wedding taking place there, at 1 pm on a Thursday.   The “guests” seemed likely people dragged in off the street in their everyday clothes.  And the bride was clearly not happy to have this “American Imperialist” crashing her wedding.

Carlos: Before I read this book I was aware that North Korea was a dictatorship with propaganda everywhere, but it was interesting to see real examples of it.  It seemed like everything was a poorly staged attempt to portray North Korea as a normal place.  Once, the author went on a tour of the Paeksong Food Factory which her handlers claimed to employ 5,000 workers. When she arrived she was told that only 5 MINUTES ago there was a power outage and that ALL 5,000 employees were sent home.  But there were no people to be found leaving the premises, lingering, or even that there was any evidence that anyone actually was there in the first place. C’mon, did the organizers of this tour really think that anyone could believe that story? 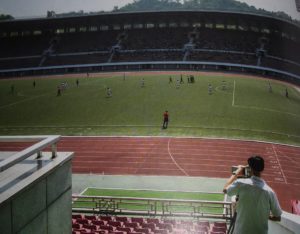 David: Or the soccer game!  Simmons had a visit to the Kim mausoleum canceled because it was mysteriously “closed” that morning.  So instead, her handlers took her to a soccer game, which purely coincidentally was scheduled to be played at exactly the time her mausoleum trip had been canceled, at 9 am on a Monday.   She was taken to a completely empty stadium to watch the game.  At one point during the second half, several hundred “fans”  in military uniforms all marched in and sat together.

Carlos: One of the more touching/sad things in this book was the author’s “Shit I think might be real list.” It seemed like 99% of her tour was contrived and planned, and nothing her handlers said was genuine.  Probably because you could be severely punished or even killed for not pleasing Kim Jong-Un and doing what you are told to do.  But there were times throughout the book that Simmons felt real connections with people she encountered.  These would make the list of things she thought might be real.  One example was when she went to the DMZ and took photos of all the military guards with her instant camera and they were absolutely amazed to see their photos develop within seconds. It was nice to read about the real connections she made with people.

David: Yeah, one of my favorite part of any travelogue is the serendipity, the random encounters that are always more memorable than the big sights and tourist attractions.  Sharing the Polaroid pictures with people is a good example.   Another good one was Simmons discovering that her waiter in the hotel restaurant spoke, of all things, Spanish.  Since she didn’t speak Korean, she couldn’t talk to most of the people she encountered,  but she was able to have an actual conversation with the North Korean waiter in Spanish.  Now that is a pure Lexplorers moment! 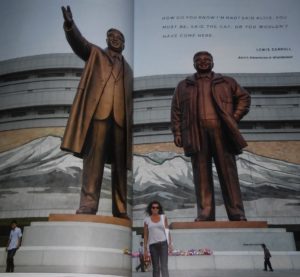 Carlos: A really disturbing recurring theme throughout the book was how worshiped Kim Jong-Un, his father, and grandfather were. Everywhere Simmons went, there were pictures, portraits, sculptures, or statues of them.  They are to be revered by the Korean citizens as Gods, and they are the center of everything in North Korea. In the chapter about the soccer match she said “we drove through the empty parking lot of Kim Il-Sung Stadium…” and I literally put the book down and laughed out loud.  That had to be about the 20th thing I saw named after one of the Kims.  Imagine a United States where everywhere you went there was a Donald Trump portrait staring at you…scary!

David: Don’t give the mentally deranged U.S. dotard any ideas, and definitely don’t tell him that North Korea uses its own calendar, in which it is currently Year 106 because time and thus Year 1 began with the birth of Kim Il-sung in 1912 (an interesting fact that we missed in our earlier Lexplorers post about calendar systems).   At least in the U.S. we have freedom of speech and can still make fun of public figures.   Simmons exercises that freedom frequently in the book by referring to the deceased North Korean leaders as the “Dear Dead Great Leaders” and Kim Jong-Un as “The Fat One.”  Talk about burning bridges; I am sure she will never again be able to visit North Korea.   While in North Korea she (wisely) didn’t write anything down, except for a few notes stored in code on her iPhone.   Many of the pictures she took on her iPhone were dangerous enough. 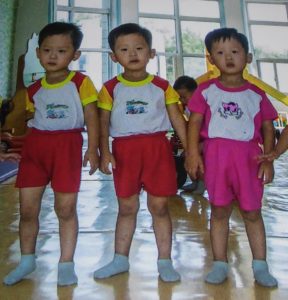 Carlos: Yea it was very impressive how she was able to recall, with a lot of detail, so much of her trip with very few notes.  The fact that she did take a few notes in code was impressive and very bold. Another thing I really liked that there were so many pictures in the book. Hearing her talk about her stories is one thing, but when you get to see actual images of what she is talking about, it becomes so much more powerful. Sad, again, to see pictures of young and innocent children who don’t realize the opportunities and possibilities that await them if only they could make it out of North Korea.  To know that they might never experience everything we get to makes you really think.

David: Growing up in North Korea can’t be much fun, but one of the most haunting details I took away from the book was learning that triplets in North Korea are considered “lucky” and “powerful,” and therefore all triplets are “taken into the state’s care and will live someplace else without being a burden to their own families.”   During her trip Simmons visits an orphanage that is full of sets of twins and triplets.

Carlos: Hey! I’m a triplet too! When I read about this in the book, I thought how if I was born in North Korea, my brother, sister, and I would have been taken away from our family.  I can’t even imagine what being in the state’s care would mean for us either.   This book did a great job of giving an inside look at the bizarre and scary life inside North Korea.   With all the crazy politics and divisions among us in the U.S right now, it can be hard to appreciate the many great things we do have, and how others in this world have it far worse.   It takes a book like this to appreciate each other a little more and the freedoms that we enjoy.   I would definitely recommend this book to anyone even slightly interested in North Korea.   Hopefully, if even for a brief moment, it can help us put aside our differences.

Well that wraps up our Lexplorers discussion of My Holiday in North Korea: The Funniest/Worst Place on Earth by Wendy E. Simmons.    We will be back soon with discussions of more books from our series of “What Were They Thinking? travel adventures.”