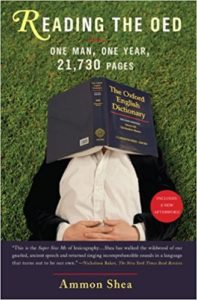 I have been on a bit of a lexicography kick lately, starting with some thoughts on words in the National Spelling Bee, and then taking an enjoyable tour through the craft of dictionary-making with Word By Word.  Despite enjoying dictionaries of all kinds, I have never actually read a dictionary cover to cover.  Fortunately Ammon Shea has saved me the trouble: he read the entire Oxford English Dictionary and wrote about the experience in Reading the OED: One Man, One Year, 21,730 Pages.

Shea writes that for him reading dictionaries is a kind of hobby, which he embarked on by reading Webster’s Second.  He enjoyed it so much that he then proceeded to read the Third (“the sequel”), and that led to reading a wide range of dictionaries, including slang collections and medical lexicons.   Eventually he made it to the largest and most famous dictionary of all, the Oxford English Dictionary, or OED (“I had been meaning to read the OED for years, but I always found some way to put it off.”)  According to the OED website,  “The 20 volume Oxford English Dictionary is an unrivalled guide to the meaning, history, and pronunciation of over half a million words.  The Dictionary traces the evolution of over 600,000 words from across the English-speaking world through 2.4 million quotations.”  Reading the OED is no trivial undertaking, as the 21,730 page dictionary is the equivalent of about 72 300-page novels and is much denser; Shea’s goal was to read the entire OED within a year. Reading the OED is also not a cheap undertaking: the 20 volume set costs £750.00.

Reading the OED follows Shea’s alphabetical progression through the OED, from A to Z.  Each chapter begins with a few pages of Shea writing about either lexicography in general or an update on the decline of his physical and mental state as he proceeds through the full year essentially isolated from society reading the tiny print in the dictionary for 8-10 hours most days.  In this respect it reminded me of the movie Super Size Me, in which Morgan Spurlock documented the adverse effects on his body and mind resulting from eating only food from McDonald’s for 30 days.  The year of reading a dictionary may have been more educational than the month of eating fast food, but it still put great strain on Shea’s body and mind, and the autobiographical details through Shea’s year were very interesting.

Each chapter concludes with a sample of Shea’s favorite words encountered while reading all the entries for that particular letter in the OED.  This is unfortunately where I felt the book gets bogged down, as I found that the lists of words quickly became repetitive.  There are certainly some gems, as might be expected among 600,000 entries.  But the words fall into three categories.  First, there are the folksy-sounding words whose meaning could probably be guessed, such as father-better, goat-drunk, halfpennyworth, assy, pissuprest, and happify.   The second category of OED words Shea highlights are the archaic words that would cause most people to say “What?  Why do we need a dedicated word for such a thing?”   These are probably the most frequent in the book and include gymnologize (“to dispute naked, like an Indian philosopher”), latibulate (“to hide oneself in a corner”), and pavonize (“to behave as a peacock might”).

The third category of OED words highlighted by Shea are those that are essentially indistinguishable from Sniglets and Daffynitions.   Sniglets were popularized by comedian Rich Hall and intended as “Any word which should be in the dictionary but isn’t.”  Some examples of Sniglets from Hall’s books are profanitype (“symbols used by cartoonists to replace swear words”), dessertation (“a waiter’s litany of what’s on the dessert cart”), and bovilexia (“the uncontrollable urge to lean out the car window and yell Moo! every time you pass a cow”).   A daffynition is a pun that involves a reinterpretation of a word’s meaning based on its sound.  Some examples of daffynitions are decadent (“possessing only ten teeth”) and buccaneer (“too much to pay for corn, buck-an-ear”).  The OED words in the sniglet/daffynition category include mythistory (“a mythologized account of history”), penultimatum (“the next-to-last demand”), pessimum (“the worst possible conditions”), vocabularian (“one who pays to much attention to words”), onomatomania (“vexation at having difficulty finding the right word”), felicifiability (“capacity for happiness”), and the very timely trumpery (“something of less value than it seems”).

In the end Shea reached zyxt (“to see” in the Kentish dialect) and met his goal of reading the entire OED in a year.  He immediately decided to start over and read it again, this time with no deadline.  He really seems to enjoy reading dictionaries, and since Reading the OED was written in 2008, Shea has possibly reread the dictionary in the intervening 10 years.  I enjoyed reading Reading the OED much more than I think I would enjoy actually reading the OED.   Living Shea’s OED-reading experience vicariously through the book is as close as I need to come to doing the real thing.