Dish-to-Pass Supper in Podunk: A Lexploration in Central New York 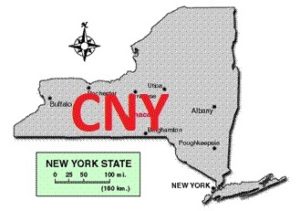 A few weeks ago, sated on a traditional Thanksgiving Tofurky feast (a portmanteau of tofu and turkey that should not be confused with tofucken or turducken), I had the pleasure of spending a few days back in my hometown in Central New York.  All too often, when I tell someone that I am from Central New York, I hear something like “Ah, the center of New York City, I love Manhattan!”  But Central New York (or CNY) is in fact quite far from New York City, physically, culturally, and linguistically.  While the exact boundaries of Central New York are undefined, I usually think of the region as roughly where the red letters “CNY” cover the map on the right.  Most places in this region are 200-300 miles from New York City, and many are in fact closer to the Canadian cities of Toronto and Montreal, not to mention to the Onondaga Nation and Cayuga Nation.

The names of places in Central New York come from many of the common origins for places in the Northeastern USA: English (Oxford, Coventry, Bath), Dutch (DeRuyter, Schuyler, Lincklaen), German (Mecklenburg, Dresden, New Berlin), and Scottish (Glonora, Dundee).  There are many places that share names with famous sites in the Old World: Naples, Odessa, Geneva, Italy, Lebanon, Jordan, and Nineveh.  There are also some place names in CNY with interesting stories behind them.   For example, there is Delhi, named after the city in India but pronounced dell-HIGH;  this pronunciation likely originates with a town elder who preferred the name Mapleton and in a huff declared “Delhi, Hell-high! Might as well call it Foote-high.”  There is a town named Weedsport, not after a sport but rather after local merchants Elihu and Edward Weed (and formerly called Weed’s Basin).  Nearby is the town of Penn Yan, a name that is a syllabic abbreviation of “Pennsylvania Yankee.”  There is the town of Horseheads, so named because it is located on a trail that was once lined with the skulls of dead horses. 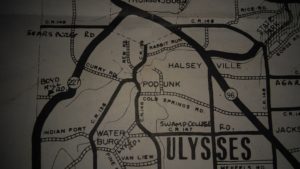 Podunk, NY, in the town of Ulysses

The town of Painted Post is the site of a distinctive burial marker for a Native American chief, a wooden monument painted with “various symbols and rude devices;”  the name Painted Post is included in Stephen Vincent Benet’s poem American Names, which is best known for its final line “Bury my heart at Wounded Knee.”  The name of the town of Trumansburg is the result of a misspelling of the name of its founder, Abner Treman; nearby Robert H. Treman State Park has the correct spelling for the family name.  Also near Trumansburg is a hamlet with one of the most infamous names in Central New York:  Podunk is an Algonquian word originally meaning “where you sink in mire,” but in modern American English, Podunk has become synonymous with “a small, unimportant town.” 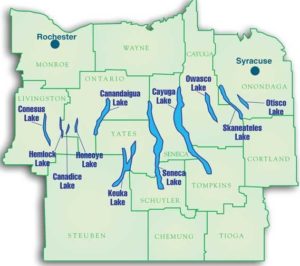 There are two truly unique categories of place names in Central New York: the Iroquoian names and the Classical names.   Central New York is home to the Five Nations of the Iroquois (or Haudenosaunee): the Mohawk, Oneida, Onondaga, Cayuga, and Seneca.   These names are ubiquitous across the region, providing names for towns, counties, rivers, and lakes.  The Five Nations later expanded to Six Nations with the addition of the Tuscarora from Carolina, but that name is not nearly as common in New York.

The Iroquoian family of languages is the source of the names of most of the Finger Lakes in Central New York, including Skaneateles (“long lake”), Owasco (“bridge on the water”), Keuka (“canoe landing”), Honeoye (“lying finger”), Canandaigua (“the chosen spot”), as well as three of the Great Lakes: Lake Erie (“long tail”), Lake Ontario (“shining waters”), Lake Huron (“Lake of the Wyandots/Hurons”). 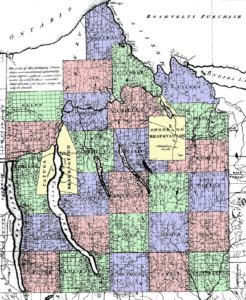 The second set of interesting CNY place names, the Classical names, has its origin in the establishment of the Central New York Military Tract,  a large land area set aside for the Revolutionary War soldiers from New York.  The Military Tract was divided into 28 townships, and the townships were assigned names from John Dryden‘s translation of Plutarch’s Lives of the Noble Grecians and Romans (plus one that was named for Dryden himself).  These original 28 Classical township names were Aurelius, Brutus, Camillus, Cato, Cicero, Cincinnatus, Dryden, Fabius, Galen, Hannibal, Hector, Homer, Junius, Locke, Lysander, Manlius, Marcellus, Milton, Ovid, Pompey, Romulus, Scipio, Sempronius, Solon, Sterling, Tully, Ulysses, and Virgil.  The person responsible for the Classical naming is somewhat in dispute.  It was likely either Simeon De Witt (the Surveyor General of the Military Tract, who himself named the city of Ithaca, wisely replacing the previous name of Sodom), or De Witt’s clerk Robert Harpur (namesake of the town of Harpursville).  For further reading, two interesting histories of the Military Tract can be found here and here.

My High School English teacher once told us a story of a former student who wanted to work in theater and tried really hard to “get rid of his Central New York accent.”   Like anybody growing up in a homogeneous, monolingual environment, none of us realized there was such a thing as a “Central New York accent.”   And, like most people growing up with an accent, even after becoming aware of the existence of the Central New York accent, we all pretty much refused to admit that any of us had such a thing.   It was only after moving away from the region that I began to be able to recognize the distinctive characteristics, but then I would tend to overgeneralize.  Several times through the years I have met someone who I thought sounded like a Central New Yorker, but in most cases they were from somewhere like Michigan or Wisconsin. 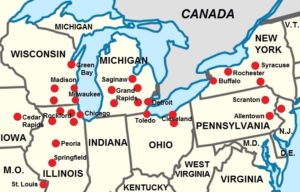 Central New York and its neighbors in the Great Lakes region are at the forefront of American English language change because of the Northern Cities Vowel Shift.  A vowel shift is a common and unavoidable process in language change in which speakers of a language move the location within the mouth where they pronounce the set of vowels.

Linguists often represent the vowels of a language, and their points of articulation, using a form of mouth map, and a vowel shift can similarly be represented on this mouth map.  The vowel shift proceeds over a long period of time as speakers (unconsciously of course) move a vowel into a different space in the mouth, then another vowel shifts into that newly vacated space, and so on.  The sequence of vowels shifting is somewhat analogous to the 15-puzzle, where a tile is slid into the open space in order to rearrange the numbers in a grid. 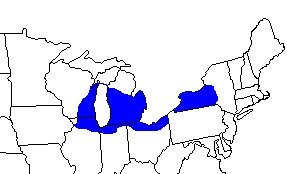 On the other hand, we can observe the Northern Cities Vowel Shift as it happens, and it is happening quickly, according to William Labov, one of the authors of the Atlas of North American English.  In a 2006 NPR interview, Labov said the following about the vowel shift happening in the region containing Central New York: “It’s new and it’s extraordinary, and now the people in that region talk more differently from the rest of the country than ever before.”

The Inland Northern American English and the Northern Cities Vowel Shift pages on Wikipedia contain extensive detail about the phonetics and phonology of the vowel shift that is underway.  In Central New York, the distinctive characteristics are widespread, especially /æ/ raising, /ɒ/ fronting, and /ɔ/ lowering.  However, the region is also located at the boundary with other dialects, including Midland American English to the South and Ontario English (which itself is experiencing the Canadian Vowel Shift) to the North.   There can be great variability in pronunciation (and vocabulary) within a small geographic area, and dialect boundaries can be very fluid and unpredictable.   For example, my family did not have the infamous cot-caught merger, but there was plenty of it going around town, and we did have both a Don and a Dawn in the house. This led to many incoming phone calls where a local cot-caught (and thus Don-Dawn) mergee would ask for /dɑn/ and get annoyed when the wrong one answered.

I think that the audio clip below (from this Youtube video) is quite representative of the state of the vowel shift in the area of Central New York where I grew up.  However, it is interesting to note that the comments below the video are split between people saying “That sounds just like my family” and those saying “I’m from there, and I’ve never heard anyone talk like that.”

Vowel pronunciation is interesting from a linguistics viewpoint, but for most people the fun part of a dialect is the distinctive vocabulary, the words or phrases that clearly belong to a particular location.  A classic example of this is the Canadian eh? or the British bollocks or crikey.  In American English there are several words with distinctive dialectal variants; for example, the plural form of you has variants including y’all (Southern), youse (New York City), and yins (Pittsburgh).   Unfortunately, Central New York English doesn’t have any particular words or phrases like eh? or yins that would make a listener immediately say “Aha, I know where you are from!”  When playing the game of “How do you pronounce this word?”, Central New Yorkers do fairly consistently have a “crick” not a creek, a “ruff” not a roof, a “root” not a route, and a “cran” not a crayon.   But none of these is unique to Central New York.  Linguist Bert Vaux has extensively researched these kinds of dialectal variations, and the maps for the various pronunciations are really fun to browse.

When it comes down to it, there are just a few phrases that I can bust out and be fairly confident that people will look at me and say “Huh?”  I don’t know that these are specific to Central New York, but that’s where I learned them, and I haven’t heard them anywhere else in my travels.  For some reason, perhaps not surprisingly, most of them involve food: