Diving Into The Korean Grammar 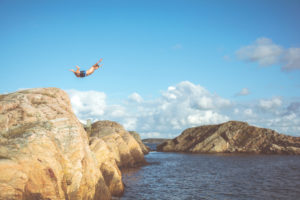 Having dipped my toe in the water by learning my first Korean words, I couldn’t resist just diving headfirst into the inviting waters of the Korean grammar.  Much like my initial impressions of the Korean writing system and sound system, most of what I found in the grammar so far leaves me optimistic that even after a deeper dive I won’t encounter sharks.  Korean word and sentence construction seem well-defined and regular, with none of the notorious elements that would scare off new learners.  There are undoubtedly some parts of the grammar that will take some swimming around to really figure out, but my first few laps have been quite pleasant and refreshing.

Here are the highlights of my first pass through the Korean grammar:

Given the lack of intimidating topics in my initial pass through the grammar, my tentative plan of attack for the grammar will be:

I fully expect to encounter some challenging elements in the grammar as I dive deeper, and I know the honorific system will require a lot of study and practice.  While an integral part of the language, honorifics fall in the category of pragmatics and will be mostly important when I have learned enough to start talking to real people.

That leaves vocabulary, which by process of elimination promises to be the primary obstacle in my Couch to Korean challenge.  Korean is a language isolate, which means I can’t draw on its language family for common vocabulary.  A large percentage of Korean vocabulary comes from Chinese (similar to Latin-derived vocabulary in English), but that also won’t help me bootstrap the vocabulary since I haven’t studied Chinese.

I have been updating the Korean Resources page as I have found additional resources.  For my initial grammar survey, I relied almost exclusively on three excellent, well-organized resources: