This phase of the Couch to Korean Challenge has been all about building vocabulary, and in the process I have explored and evaluated many different Korean vocabulary resources.  In this post I will share my thoughts on a few of these resources.  As always, I will be keeping the Korean Resources page updated with everything I come across.

My approach to building vocabulary has two aspects:

Since we have separately written Lexplorers reviews of some resources for vocabulary study using flashcard systems (for example, here and here), in this post we will focus on resources for finding and learning new words. 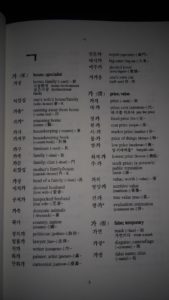 Handbook of Korean Vocabulary: A Resource for Word Recognition and Comprehension 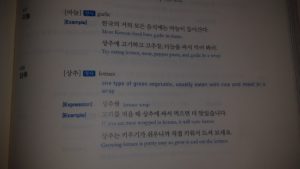 Another resource I am finding very useful is Korean Vocabulary Practice for Foreigners.  It contains hundreds of entries organized into categories such as Time, People, Food, and Residence.  Each entry contains pronunciation, part of speech, English definition, and example sentences in both Korean and English.  Having examples of new words in actual sentences is perfect for a language learner.  A large collection of bilingual sentence examples is also ideal for learning (or solidifying) grammar concepts.  The English translations of the Korean sentences are mostly good, but they are clearly written by a non-native English speaker and contain minor grammatical errors and awkward phrasing.  For example, in the entry for garlic, the example sentence is “Most Korean food have garlic in them.”  One sentence for lettuce is “Growing lettuce is pretty easy so grow it and eat the lettuce.”   But I am not trying to learn English from these sentences, so I can easily overlook the errors as long as the Korean sentences are correct. 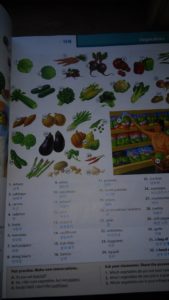 I recently revisited the Oxford Picture Dictionary English-Korean, which I first looked at in the early stages of the Couch to Korean Challenge.   This is an interesting thematic dictionary made for learners of (American) English, with pages of pictures for topics like family members, body parts, and fruit.   The book is available in a wide variety of languages; the English version and pictures are identical in each version, with the non-English words changed to the appropriate language.  I am finding the Oxford Picture Dictionary especially useful for targeted learning of new categories, such as vegetables and mammals and clothing.   Since the book is made for American English learners, there is a bias toward American topics such as U.S. History and U.S. National Parks.  The book also does not address the specifics of the non-English language, assuming that all readers are learning English and not the other language.  For example, on the Numbers page, only one of the two Korean number systems is given, and the Colors page doesn’t address the many different forms that Korean color words can take.   But the book is well organized, and the pictures are very helpful for visualizing the items represented by new words. 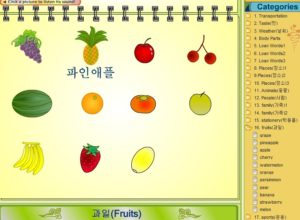 The University of Indiana Online Korean Multimedia Dictionary is similar to the Oxford Picture Dictionary in that it organizes the vocabulary into categories like weather, colors, fruits, and family.   This online dictionary also has pictures for the words and has the added advantage of having audio recordings (one male voice and one female voice) for each word.   The pictures for a topic first are shown without the written word, which only appears when you mouse over the picture.  This makes it easy to practice word recall by first looking at the picture, then clicking on it to see the word and hear it spoken. 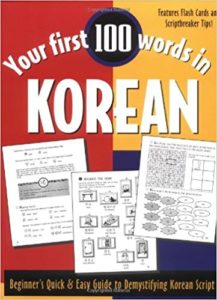 Your First 100 Words in Korean

Just for fun, I flipped through Your First 100 Words in Korean.  I am generally skeptical of these kinds of “It’s Fun!  It’s Easy!  Learn a language in just 10 minutes a day!” language learning resources.  Your First 100 Words is full of cartoons and matching exercises,  and it primarily is targeted at helping a beginner with “Demystifying Korean Script” (although this is made more difficult by the incorrect and inconsistent pronunciation guide).  While I would never use a book like Your First 100 Words as a serious resource to learn a language, it can serve a useful purpose in the early stages of vocabulary acquisition (and it is great for kids).   The book is limited to basic vocabulary (i.e. the “First 100 Words”), and the matching exercises and tear-out flashcards are useful for practicing these 100 words.   I don’t consider words like “refrigerator” and “monkey” to be among the first 100 words I want to learn in a new language, but this book is a fun alternative to the denser resources I have been spending most of my time with.